Paintings by 18th-century Venetian view painters such as Canaletto and Guardi were avidly collected by local connoisseurs and foreign visitors alike. The enduring popularity of their work encouraged countless imitations, which also found their way into collections throughout Europe as travellers returned home with these souvenirs of the Grand Tour. 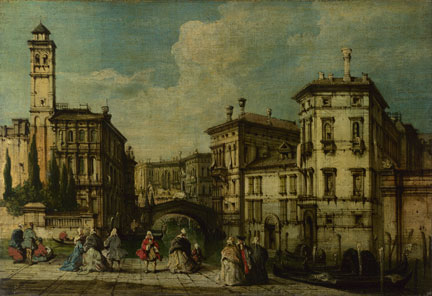 This imagined Venetian view was one of eight paintings selected from nearly 100 pictures offered in a bequest to the National Gallery by John Henderson, a London collector, in 1879. It is not known how Henderson came to own the painting, although it is likely he acquired it in London sometime before 1857.

In a 1904 catalogue of Guardi’s paintings, the art historian George Simonson expressed doubt over the attribution of the work: "the painting of the sky and the buildings in it betray the lesser skill of another hand and there is no trace whatsoever of what a French critic has aptly called Guardi’s 'griffe endiablée' [furious touch] in the rendering of the quaintly-costumed figures in the foreground of the picture." Since then, for over a century, this painting has been catalogued as by an unknown imitator of Guardi’s work. 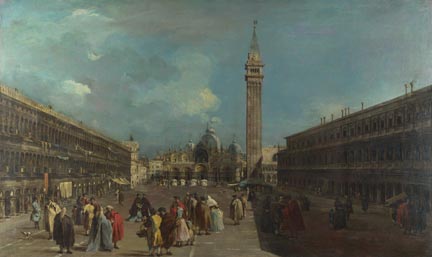 Francesco Guardi was, after Canaletto, the best known of 18th-century Venetian view painters. Whether topographically accurate views, idiosyncratic reshufflings of identifiable monuments (such as the National Gallery’s painting) or whimsical capricci, paintings by Guardi, Canaletto and their colleagues were enormously popular with both local and foreign collectors.

English travellers to Venice were delighted to bring home these picturesque souvenirs of the Grand Tour. While some preferred the neoclassical precision of Canaletto’s views, Guardi’s sparkling ‘impressionistic’ brushwork corresponded to a taste for a more romantic view of nature.

The popularity of Venetian view paintings and specific appreciation of Guardi’s scintillating brushwork attracted imitators eager to capitalise on the market for his works, both during the artist’s lifetime and long after. The Gallery’s picture may not have been made to deceive the buyer intentionally, but merely to satisfy a taste for Venetian views executed in a ‘Guardi-like’ manner. The distinction between original and imitation may have been lost when the painting passed to a subsequent owner.

In order to determine more closely when this Venetian view might have been painted, in 1955 small paint samples were taken from areas of colour which, based on visual examination, might have contained modern pigments. Microchemical analysis of a sample taken from a figure in the foreground of the painting found evidence of cobalt, suggesting the use of cobalt blue. Also known as Thénard’s blue, this is a man-made pigment discovered in France in 1804. The painting itself was therefore assumed to have been produced sometime after 1804. 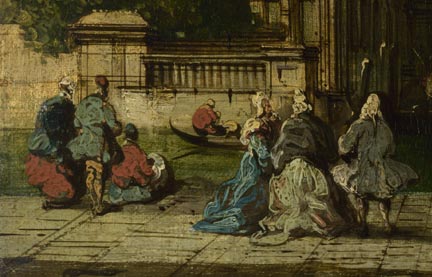 Detail of figures at lower left, ‘Venice: Entrance to the Cannaregio’

Since the archived reports written in 1955 were not entirely clear on the matter, in 2009 the painting was sampled again to determine exactly where the cobalt pigment had been found. The greater precision possible in modern pigment analysis yielded more specific results. The bright blue coat worn by the man at the centre of the figural group at far left, as well as the dress of the woman to the left of the second group from left, were found to have been painted using Prussian blue mixed with lead white and some earth pigments.

Prussian blue was available from 1704–10, well before Guardi’s active lifetime, and thus not useful in dating the picture. However, the cross-section of a sample taken from the blue jacket of the figure furthest left showed a distinct surface layer applied on top of the original paint layers. 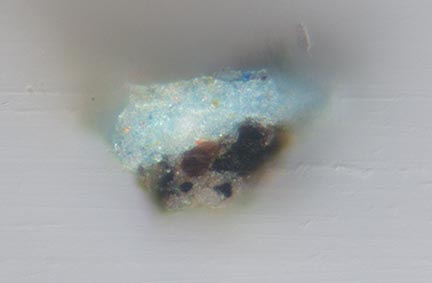 Photomicrograph of paint cross-section taken from figure at far left. Above a layer of Prussian blue mixed with other pigments is a distinct layer containing cobalt blue or cerulean blue (visible at the upper right of the sample)

Elemental analysis by SEM-EDX confirmed the presence of cobalt in this layer, suggestive of either cobalt blue or cerulean blue, a synthetic pigment in use from the 1870s. As this was clearly later overpaint, possibly applied to conceal an area of damage to the original paint layers, it could not be used to date the original painting. Nor has cobalt blue been found in any other areas of the painting sampled.

Therefore the earlier assumption – that the painting must postdate 1804 – is no longer valid. In this instance, re-examining a painting with modern analytical techniques has resulted in more precise knowledge about the position of later pigments within the structure, but no greater certainty about when the painting was made.

Painting
Venice: Entrance to the Cannaregio
Imitator of Francesco Guardi