The Baptism of Christ

Two almost identical versions of a Baptism of Christ composition were offered to the National Gallery in the 19th century as authentic Renaissance paintings. Only one was acquired, but both were subsequently thought to be fakes. Recent scientific investigation, however, can show that in fact they date to before the 18th century, while compelling art historical evidence suggests that one might even be by Sassoferrato. 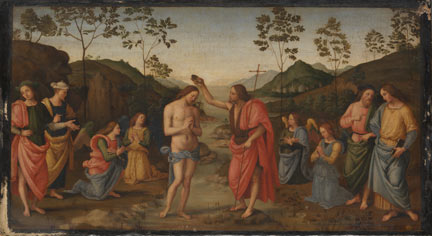 Attributed to Sassoferrato, after Pietro Perugino, The Baptism of Christ, about 1630–50 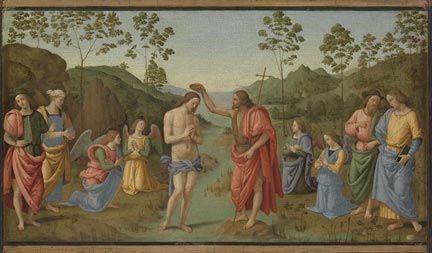 These two paintings showing the Baptism of Christ are now known to be copies of a panel painted by Perugino for the Benedictine Abbey of San Pietro in Perugia, Italy. Perugino’s original painting formed part of the predella of the high altar that was dedicated in the year 1500. 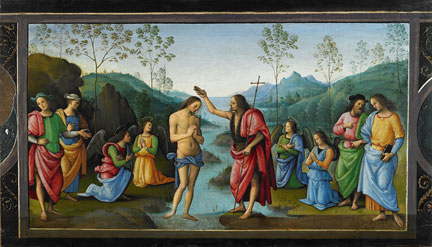 The copy now in Canterbury City Museums was originally offered to the National Gallery in the 1880s as the work of the 16th-century painter Timoteo Viti. After the Director, Sir Frederic Burton, rejected the painting as a 19th-century fake, the owner offered it to the Royal Museum in Canterbury, who accepted it.

A decade later the new Director of the Gallery, Sir Edward Poynter, acquired a nearly identical painting of ‘The Baptism of Christ’ from Godfrey Kopp, who would later be unmasked as a noted fraudster. Although Poynter thought he had acquired an autograph work by Perugino, others were not convinced. Between 1898 and 1907 articles in both academic journals and the British press berated the National Gallery and its Director for buying a fake. Poynter never changed his opinion, but the tide of opinion had changed and for most of the 20th century the Gallery's painting was dismissed as a 19th-century copy. A similar fate befell the Canterbury version.

In 1970 National Gallery scientists took pigment samples from their painting and were surprised to discover that it contained no ‘modern’ pigments. In fact, when these samples were analysed again in 2009, it was established that the painting includes a rare pigment, lead-tin-antimony yellow, which has generally been found only in paintings made in Rome in the 17th century. 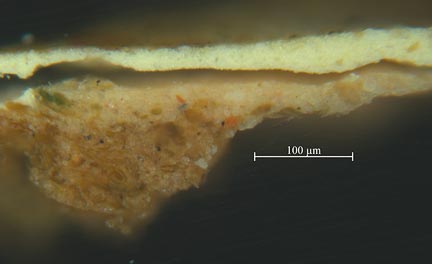 Cross-section of a sample taken from an area of yellow drapery. The warm pinkish ground composed of earth pigments with a little lead white in oil has been applied in two layers. 'The Baptism of Christ', National Gallery

Other pigments, such as an artificial form of azurite (blue verditer) in the dark green foliage at the top right and the natural azurite that occurs in some of the blue drapery, are also consistent with a 17th-century dating. The ground was found to be a warm pinkish colour, also typical of 17th-century manufacture. 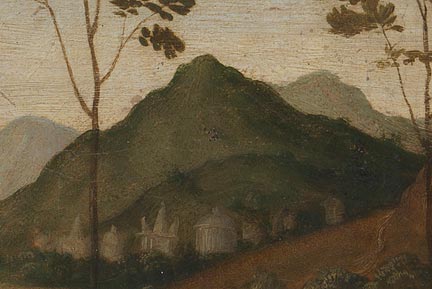 Detail showing the warm pinkish ground showing through damages and thinly painted areas of the sky and distant landscape. 'The Baptism of Christ', National Gallery

Attribution and date of the National Gallery painting

In the mid-17th century, Perugino’s original painting was still at San Pietro in Perugia, where it would have been seen by the painter Sassoferrato. Between 1630 and 1650 Sassoferrato produced various pictures for San Pietro – some original compositions, but mostly copies after Raphael, Perugino and others. 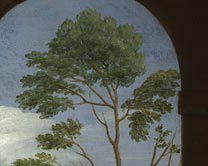 Sassoferrato, The Virgin and Child Embracing, 1660–85, detail of leaves

It is distinctly possible that the Gallery’s painting is Sassoferrato's work, especially since it demonstrates several idiosyncrasies of his style. These include a tendency to make faces rounder and to paint broad flat leaves, which are quite unlike those of the original panel. Indeed, the leaves on the Gallery picture compare very well with Sassoferrato’s The Virgin and Child Embracing. Sassoferrato is also one of the few painters known to have used lead-tin-antimony yellow.

Like the National Gallery’s version, none of the pigments used in the Canterbury copy suggest a date of manufacture in the 19th century. The presence of lead-tin yellow (mixed with a manufactured copper pigment, lead white, vermillion and black to produce the green of the distant landscape) indicates a date before the mid-18th century, while the mid-tone ground colour again points to a date in the late 16th or 17th centuries.

The blue pigment in the Canterbury ‘Baptism of Christ’ is exclusively ultramarine. It is used either alone or combined with a red lake pigment to produce the rich purple colour of Christ’s loin-cloth and the drapery of the angel kneeling to the right of the Baptist. 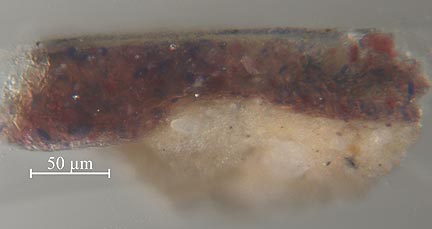 These same areas appear blue in the Gallery picture, however, with no evidence of red lake pigment. The implication is that areas in Perugino’s original had faded from purple to blue between the production of these two copies, so that the Canterbury ‘Baptism’ is probably earlier than the National Gallery version. It seems likely that the Canterbury picture was executed between 1591, when Perugino’s original was removed from the high altar and placed in a more accessible location, and the second quarter of the 17th century, which is the probable date of the National Gallery’s painting.

Painting
The Baptism of Christ
Probably by Sassoferrato (after Pietro Perugino)