When this painting first appeared around 1930, it was praised as a work by Botticelli. Not long afterwards, however, the investigations of art historians and scientists revealed it to be an outright fake, made with the intention to deceive. 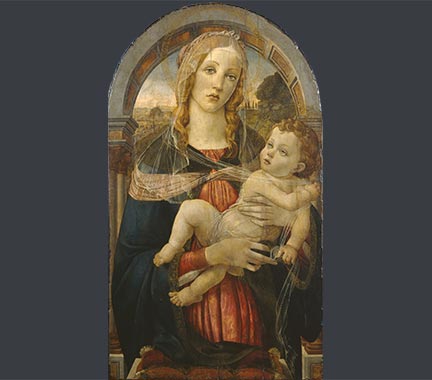 The noted art collector Lord Lee of Fareham bought the Madonna of the Veil in 1930 from an Italian dealer for the sum of $25,000. He subsequently bequeathed it to The Courtauld Gallery, London in 1947. Despite a lack of information about its origins, the picture was universally hailed by connoisseurs and academics as a masterpiece by Botticelli when it first arrived in London in the early 1930s. The directors of the Medici Society published the painting as a 'superb composition of the greatest of all the Florentine painters' while the eminent critic Roger Fry acknowledged that it was 'by a master'.

The attribution to Botticelli was questioned when Kenneth Clark (Director of the National Gallery from 1934), noticing the Madonna’s particular charm, suggested that it had 'something of the silent cinema star' about it. He even compared her directly to Jean Harlow.

Following the Second World War, detailed examination of the painting during conservation treatment exposed elements that cast further doubt on its authenticity. The robe of the Madonna, for example, is painted using Prussian blue, a pigment that only came into use in the early 18th century. Visual examination under a hand-held lens showed the grains of pigment to be very finely ground. This is characteristic of machine-ground commercial pigments; 15th-century pigments were ground by hand and therefore generally have a coarser grain.

In 1994, scientific investigation using EDX analysis showed the presence of 19th-century pigments, including cobalt blue, zinc chromate and opaque chromium oxide green. This last colour did not become commercially available until 1862, placing the painting’s production after that date.

Elements of the technique also exhibited inconsistencies with genuine works by Botticelli. X-radiography of the wooden panel confirmed that it had not been prepared in the traditional way. Likewise, examination under the microscope revealed that the Madonna’s lips are outlined with black paint, although Botticelli’s practice was to paint them with a madder lake pigment.

A work to deceive

The painting is now accepted as the work of the forger Umberto Giunti (1886–1970). A teacher at the Institute of Fine Art in Siena, Giunti developed a reputation primarily for his convincing forgeries of fresco fragments. ‘Madonna of the Veil’ is undoubtedly a work intended to deceive, rather than just a copy. Analysis of both the surface craquelure and paint losses shows many of them to have been created by intentional damage. Even the worm holes in the painting’s panel support would appear to be false – stress fractures in the paint around the holes imply they were made using a drill.

The discolouration of the green foliage behind the Madonna also proved suspicious. Such a type of brown discolouration is not uncommon in 15th-century paintings as a result of the degradation of a copper resinate pigment; however, the foliage in ‘Madonna of the Veil’ was shown to have been intentionally painted using an umber pigment to imitate this effect, giving it a false sense of age.

The painting is a sophisticated forgery, not directly reproducing one work by Botticelli but fusing elements from several paintings into a new, plausible composition. The ‘Madonna della Melagrana (Madonna of the Pomegranate)’ and the ‘San Barnaba Altarpiece’ (both in the Uffizi Gallery, Florence) have been suggested as models for Giunti’s invention. It seems likely that his primary concern was to make the superficial impression of authenticity as strong as possible, not realising that one day scientific investigation would reveal his skilful forgery.

Juliet Chippindale is a National Gallery curatorial intern in association with the Courtauld Institute MA 'Curating the Art Museum'. This material was published on 30 June 2010 to coincide with the exhibition Close Examination: Fakes, Mistakes and Discoveries

A. King, ‘An Evaluation of Selected Methods of Technical Examination in the Detection of Forgeries’, Research Project, Department of Conservation and Technology, Courtauld Institute of Art, London, 1994, pp. 8–13