Landscape: A River among Mountains

From Italy to the Netherlands and back again – where does this painting really belong?

For many years this view of an expansive landscape was catalogued as a work of the Netherlandish School, although identifying the artist who might have painted it was a continuing challenge. When scientific analysis determined that the painting was probably made in Italy, unravelling its origins became far more complex. 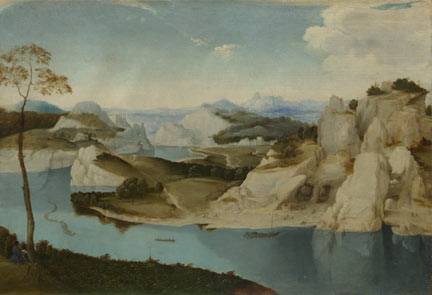 Imitator of Pieter Bruegel the Elder, Landscape: A River among Mountains, about 1600

The search for the painter of this bird’s-eye view of a river winding through a rocky valley has encountered as many twists and turns as the river itself. From about 1814 to 1852, the painting was attributed to Bernardino Luini, but it was sold to the National Gallery in 1889 simply as a painting of the Venetian School. It retained this attribution for about a decade. Between 1898 and 1921 the painting was catalogued as ‘undoubtedly’ by Joachim Patinir, a 16th-century pioneer in Netherlandish landscape painting, and between 1925 and 1929 as ‘School of Patinir’.

Many art historians outside the Gallery questioned the connection to Patinir and proposed alternative attributions to a range of 16th-century Netherlandish painters. One of the names proposed was Pieter Bruegel the Elder, based on the composition’s close similarity to an engraving after a drawing by Bruegel. In 1945, Gallery curator Martin Davies catalogued the painting as ‘Netherlandish School’, and proposed a date of ‘more nearly of 1525 than 1550’. The picture has retained this attribution until relatively recently.

In 1979, the painting’s wood panel support was analysed and found to be made of poplar, not oak, as had been stated previously. While Netherlandish painters typically used oak panel supports, most Italian painters of the period painted on poplar. The ground layer was found to be gesso bound with glue – a method of preparation typical of Italian paintings (Netherlandish painters commonly used chalk, calcium carbonate, also bound with glue). Yet how, and why, would a ‘Netherlandish’ painting have been made in Italy? 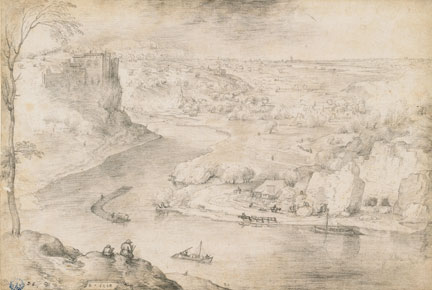 The composition of the National Gallery work is indirectly based on a drawing by the 16th-century Flemish artist Pieter Bruegel the Elder. Athough Bruegel’s original drawing is lost, the composition survives in a drawn copy in Besançon and in an engraving by Simon Novellanus published around 1595 – the latter adding the mythological figures of Mercury and Psyche to the sky above the landscape. 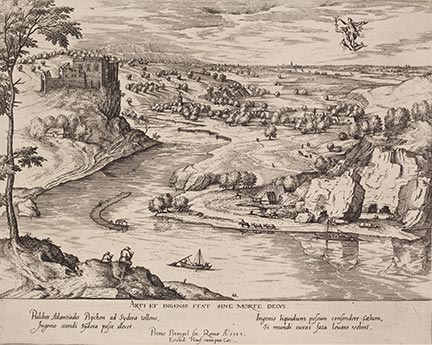 Simon Novellanus, after Pieter Bruegel the Elder, ‘River Landscape with Mercury and Psyche’, about 1595
© The Trustees of The British Museum

An inscription on the print indicates that Bruegel made his original drawing in Rome in 1553. The painter of Landscape: A River among Mountains took the main elements of his composition from the print, but altered or simpified many features. For example, he eliminated one of the two draftsmen sitting at left and moved the other to the far side of the tree. He also expanded the composition at the right and transformed the vista over a distant plain into a view of rocks, woods and mountains.

If the painter of the Gallery’s picture based his composition on Novellanus’s print after Pieter Bruegel, the painting must necessarily date after about 1595. Lorne Campbell has observed that the painting’s bizarre rock formations are very much in the style of another 16th-century Netherlandish painter, Herri met de Bles (about 1510 – about 1555–60), whose works were popular among Italian collectors.

Campbell has proposed that ‘Landscape: A River among Mountains’ is a pastiche of influences from Bruegel and Herri met de Bles, painted about 1600 by an Italian artist working in a Netherlandish manner. The painter was probably inspired by the contemporary taste for Netherlandish landscape paintings in Italy.

Painting
Landscape: A River among Mountains
Imitator of Pieter Bruegel the Elder