A Man embracing a Woman

A Man embracing a Woman by the celebrated Ferrarese painter Dosso Dossi began life in a very different form – it was a ceiling tondo in the Camera del Poggiolo in the Estense Castle, Ferrara. Not only has the picture’s shape been changed, but paint samples also reveal a complex layer structure in the sky, suggesting that the artist (or his patron) changed his mind while the work was in progress. 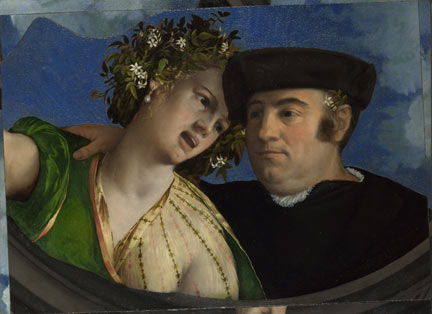 Dosso Dossi, A Man embracing a Woman, probably about 1524

In 1887 a double portrait, described as the poet Boccaccio and his mistress Fiametta by Giorgione, was sold to the painter and collector Charles Fairfax Murray. It was acquired from him by the National Gallery in the same year and immediately reattributed, correctly, to Dosso Dossi. The painting had evidently been cut from a larger composition, but it was not until its restoration in 1980 that its unusual structure was fully appreciated. It is now rectangular, but this is clearly not the work’s original shape. 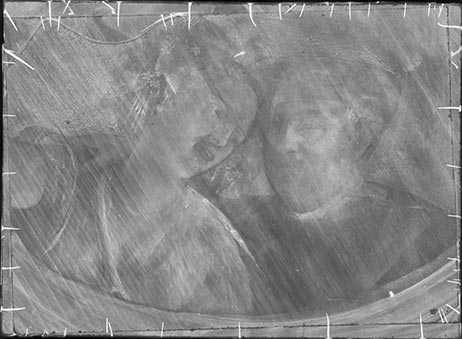 An X-ray mosaic made before its restoration shows its unusual structure. At the top left corner, a wave-shaped insert has been nailed to the panel to regularise the shape, while triangular wedges have been added to all four sides to rotate the composition slightly. These various additions were nailed and glued onto the main panel so successfully that they have adopted its warp, despite having wood grains that run in different directions. The joints between them were filled in with putty (as were some of the drying cracks in the paint) and the transitions disguised with overpaint.

Along with the old varnish, the putty and later paint were removed during cleaning in 1980. The cleaning revealed that the additional elements, although not originally in this configuration, did come from the same tondo (including a fragmentary hand evident in the addition along the bottom). Around the same time Guglielmo Galli, an Italian scholar, speculated that a fragment of a painting by Dossi in the Fondazione Longhi, Florence also came from the same ceiling as the Gallery painting. By the early 1980s, then, it was possible to suggest a hypothetical reconstruction of the original ceiling in the Estense Castle, Ferrara. 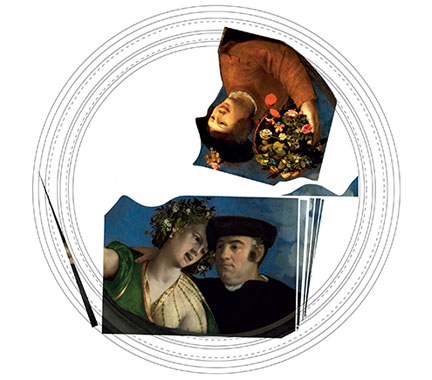 Reconstruction by Jill Dunkerton of Dosso Dossi's ceiling tondo, showing the probable location of the surviving fragments, including 'A Boy with a Basket of Flowers', canvas (transferred from panel), about 1524, Longhi Collection, Florence © Photo Scala, Florence

Several paint samples were taken at the time of the restoration of ‘A Man embracing a Woman’, from which it has been possible to establish that the medium is walnut oil. Samples have also revealed that the layer structure in the area of the sky is particularly complex, which could account for the drying problems in this area (evident in the pronounced cracking). 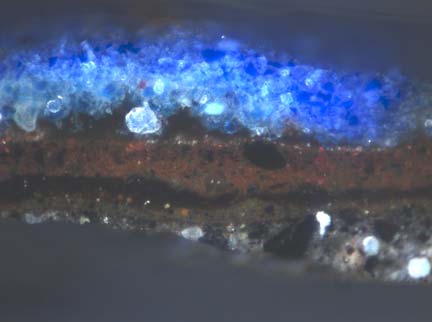 Over a dark grey priming are two layers of brown paint, a thin discontinuous layer of warm golden yellow and an unpigmented layer that FTIR microscopy and GC-MS have identified as a rare survival of a 16th-century varnish of resin from the sandarac tree (a coniferous tree from North Africa).

Only after this varnish layer was the blue paint of the background applied. This consists of an underpaint of azurite mixed with lead white, over which was applied a layer of high quality (and extremely expensive) natural ultramarine. These multiple layers probably led to the wrinkling and cracking that has affected the surface, especially in the background areas.

It is still not known what change of mind is revealed by this complicated overlaying of paint, although the blue paint layers are unlikely to be a later addition. The grey priming over the gesso ground contains a black pigment rich in sulphur (detected with EDX analysis), possibly coal black. Coal is not mentioned directly in treatises of the period, but is perhaps one of several pigments called generically ‘black earths’. It has recently been identified in 16th-century Italian paintings.

In 1524 Alfonso d’Este, Duke of Ferrara, commissioned Dosso to paint a tondo for the ceiling of the Camera del Poggiolo in the Estense Castle, Ferrara. Subsequent descriptions of this painting, coupled with existing knowledge of the National Gallery picture’s history, made it possible to link the work with this important commission. Interestingly, in 1524, and again in 1526, Dosso received payments from Alfonso to reimburse him for the expensive ultramarine used in the tondo.

In 1608 Dosso’s tondo was transferred from Ferrara to the Borghese collection in Rome. Sometime after 1700 and before 1828 the painting was cut into sections – undoubtedly to make them more saleable. As it is now impossible to reconstitute Dosso’s tondo for the Camera del Poggiolo from the surviving fragments, it was decided not to dismantle the current assemblage of ‘A Man embracing a Woman’.

A. Braham and J. Dunkerton, ‘Fragments of a Ceiling Decoration by Dossi Dossi’, ‘The National Gallery Technical Bulletin’ 5, 1981, pp. 27–37