The National Gallery’s West Entrance is surmounted with a figure of Victory, framed by another full-length, draped female figure in each of the niches to left and right. As this pair of flanking figures do not carry any attributes, it is hard to identify who they represent. All three statues are the work of the British neoclassical sculptor Edward Hodges Baily. They were not made for the National Gallery, but were commissioned by King George IV for other structural projects in central London - in the case of the Victory figure, for the Marble Arch, a monument intended to celebrate Britain’s defeat of the French in the Napoleonic Wars. 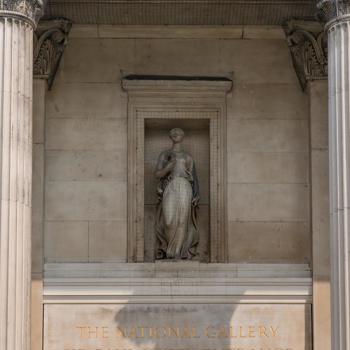