The technical examination reaffirmed the sense that the painting is not finished in the traditional sense. Some of the details have the extraordinary perfection that you would expect in a painting by Leonardo – such as the face of the angel. Other sections such as the left foot and the blessing hand of Christ seem less complete and perfect by comparison. Were these features painted by a studio assistant? Or was the painting simply completed by Leonardo in the poorer light of the confraternity chapel? 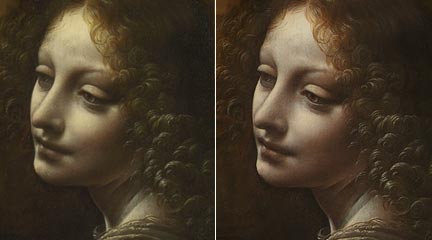 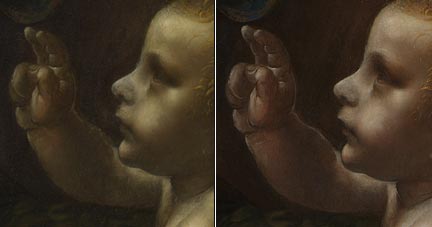 It now seems possible, however, that Leonardo painted the whole work. Leonardo’s creative process can be seen throughout the whole painting, giving us an insight into the way he worked.  You can see his hand in the continual adjustments and modifications, interminable delays, and the apparent reluctance to set down a fixed and definitive image.

In 2005, researchers at the Gallery had already discovered a hidden underdrawing, showing that Leonardo had originally conceived a different design for the painting. The latest cleaning reaffirms what we already knew about Leonardo’s erratic working methods, showing how his process evolved in the time from the commission to the completion of the work (a rather extended period of over 25 years).

On another note there was also a discovery contributing to our knowledge about pigments. Using new analytical methods, Gallery scientists were able to identify a type of red-lake pigment which had been described in contemporary written sources, but had never before been found on a one of the Gallery's paintings.

Next: The new frame