Image: Detail from Pisanello, 'The Virgin and Child with Saints', about 1435-41

Saint Anthony is believed to offer protection against leprosy and disfiguring skin diseases. Skin diseases such as ergotism and erysipelas were known as ‘Saint Anthony’s Fire’ due to the belief that he could cure them.

Saint Anthony lived as a hermit in Egypt and was the founder of monasticism.

The 11th-century military and religious order, the Knights Hospitaller of Saint John of Jerusalem, took Saint Anthony as their patron saint. When the pope granted them permission to let their pigs roam freely in medieval towns they adopted the pig as their emblem. As a result, Saint Anthony is often represented with a pig. 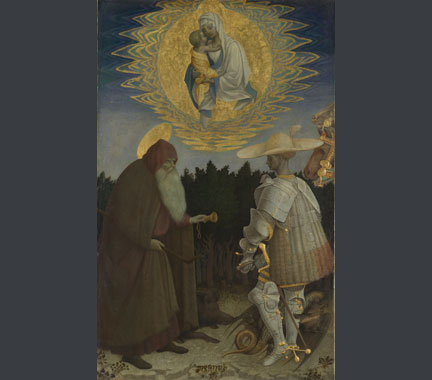 Explore more images of Saint Anthony in the collection

Saint Anthony Abbot
Jacopo di Cione and workshop
Not on display
Saint Anthony Abbot
Giovanni di Nicola
A fierce-looking old man with a fantastically curled beard glowers from a gilded background. He wears a monastic habit (a long, loose garment) – this is Anthony Abbot, the founder of Christian monasticism. He almost certainly once formed part of a polyptych (a multi-panelled altarpiece) and was p...
Not on display
Christ appearing to Saint Anthony Abbot
Annibale Carracci
A bearded man in a hair robe is being violently threatened by a horde of demonic creatures. He has cast aside his book and is gazing up at the heavens for help, where Christ has appeared reclining on a cloud.This very small picture is one of a number of works on copper that Annibale Carracci pain...
Not on display
Saints Anthony Abbot and Francis of Assisi
Andrea Sacchi
Holding a book that seems to thrust forward out of the picture plane is Saint Anthony Abbot, identified by the tau- (T-) shaped walking stick he used in later life. He also wears a black habit, which his followers, the Antonine monks, later adopted. Next to him, slightly set back, is Saint Franci...
Not on display