‘The Family of the Infante Don Luis de Borbón’

This is Goya’s first portrait masterpiece, painted in 1784 for the young brother of King Charles III of Spain, the Infante Don Luis de Borbón. Not unlike a scene taken from Mozart’s opera ‘The Marriage of Figaro’, Goya has chosen to depict Don Luis’s family in an informal setting engaged in daily routine. The lady of the house, María Teresa de Vallabriga, is having her hair arranged by her coiffeur, while her elderly husband Don Luis (32 years her senior) plays a game of solitaire. Watching on is an assortment of servants and members of the household, including their three young children.

Goya has inserted himself into the left-hand corner, painting ‘live’ the scene we see before us, probably on the very canvas he used for the painting we see today. Goya had spent two summers with the family, residing in their newly built palace 90 miles south-west of Madrid. Don Luis’s promiscuous affairs had caused scandal at court and his elder brother had forced him to marry and live in exile. Undeterred, Don Luis set up a ‘mini-court’, inviting leading artists, architects, and musicians, including the celebrated cellist and composer Luigi Boccherini, to work for him. Surrounded by a great art collection, excellent hunting grounds, and good company, Goya was delighted with his stay. In his letters to his friend Martín Zapater, he writes excitedly about how he has been out hunting with the infante and that his portraits were received with ‘unexpected applause since other artists had already been there and not made a success of it.’ 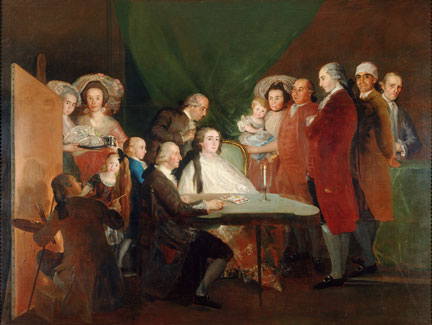