Joseph Wright 'of Derby', An Experiment on a Bird in the Air Pump

An audience has gathered around a lecturer to watch an experiment. It is night, and the room is lit by a single candle that burns behind a large rounded glass containing a diseased human skull. A white cockatoo has been placed in a glass container from which the air is being pumped to create a vacuum. Will the lecturer expel the air completely and kill the bird, or allow the air back in and revive it? Wright focuses on the viewers‘ differing reactions – from the girl unable to watch to the lovers with eyes only for each other.

This is the largest, most ambitious and dramatic of the series of ’candlelight' pictures Wright painted during the 1760s. It captures the drama of a staged scientific experiment but it also functions as a vanitas – a painting concerning the passing of time, the limits of human knowledge and the frailty of life itself.

It is night in a grand private house: through the window the moon gleams behind a cloud. A travelling lecturer, with all the drama of a magician, fixes his gaze upon us. An audience of men, women and children are gathered around him to watch the experiment he is conducting. The room is lit by a single candle that burns out of sight on the polished table behind a large rounded glass containing a diseased human skull. The candlelight is diffused through the murky liquid and illuminates the faces of the observers, casting deep, dramatic shadows – every furrow of the lecturer’s brow and curl of his silver hair is heightened.

A rare white cockatoo has been taken from its cage and placed in a glass container from which the air is being pumped to create a vacuum. The cockatoo convulses in distress as it struggles to breathe. With one hand raised, the lecturer has the god-like power over life or death – he can either expel the air completely and kill the bird or allow the air back in and revive it. A gentleman times the experiment on his pocket watch, while the youth seated beside him leans in for a closer view. The lecturer points to the ticking watch and, with his other hand on the air valve, looks to us as though the decision is ours.

The little girl observes the bird with fascination, but her elder sister cannot bear to watch and covers her eyes. Her father places his arm around her shoulder, perhaps to reassure her, or to explain that all living creatures must one day die. The boy beside the window waits, rope in hand, to see whether he will need to lower the cage for the reprieved bird. The young couple beside the lecturer only have eyes for each other. They are Thomas Coltman and Mary Barlow, friends of the artist who were to marry in 1769 and sit for their double portrait, Mr and Mrs Thomas Coltman. The elderly man on the right contemplates the skull, lost in thought. The skull and candle are emblems of mortality, but Joseph Wright’s painting leaves us uncertain of the outcome for the bird.

Paintings such as this fitted into none of the generally accepted categories of British art. Its subject was not from literature, it was too modern to be a history painting and too serious to be a conversation piece. The Air Pump captures the drama of a staged scientific experiment but it is also a modern-day vanitas – a reminder of the passing of time, the limits of human knowledge and the frailty of life itself.

During the 1760s Wright painted a series of ‘candlelight’ pictures of increasing complexity. A Girl reading a Letter by Candlelight, with a Young Man peering over her Shoulder (private collection) of about 1760–2 was probably the first. In it, Wright has observed the dramatic effects of light thrown upwards by candlelight onto the girl’s face and the more shadowy face of the man behind her. Wright’s use of strong directional light and deep shadow to create drama was new in British art. Three Persons viewing the Gladiator by Candlelight, exhibited in 1765 (private collection), shows three men studying a copy of one of the most famous sculptures of antiquity, the Borghese Gladiator, conveying the excitement of the acquisition of knowledge. The following year, in 1766, Wright exhibited A Philosopher giving that Lecture on the Orrery, in which a Lamp is put in place of the Sun (Derby Art Gallery). The ellipses of the candlelit orrery demonstrate the movement of the earth around the sun. Wright had realised that a scene communicating ‘the Pleasures of Science’ to men, women and children with different levels of knowledge could be made into a dramatic painting on a large scale.

An Experiment on a Bird in the Air Pump, exhibited two years later, is even larger than The Orrery and the most ambitious and theatrical of all Wright’s candlelight pictures. The experiment was not new in 1768 as it had been invented over a century before, but what was new was showing its impact on ordinary people. The public probably only encountered ’science‘ in the form of demonstrations by travelling lecturers, usually in town halls or, as here, privately by invitation. In The Air Pump, Wright celebrates the new appetite for learning.

His first idea for the picture is painted in oils on the back of his Self portrait of about 1767–8 (private collection). In the oil sketch there are fewer figures: the father and girls are present, as is the older man and the gentleman with the pocket watch. However, the lecturer is less dramatic, positioned to the side of the air pump and demonstrating the experiment on a small bird, primarily to the girls. Wright’s final version, with the air pump in the centre of the canvas, gives much greater prominence and power to the lecturer and heightens the drama of the scene.

In The Air Pump, Wright carries out his own experiment into what happens to colours as they recede from the light. The lecturer’s showy red robe is of light red damask woven with arabesques; salmon pink in the candlelight, but darkening to magenta as the eye travels further from the light. The girls’ dresses transform from pale lilac to purple and then to black. The little girls are the most brightly lit figures, and their reactions to the bird’s fate the most extreme. The polished surface of the table reflects the light and the objects on it and surrounding it. The younger girl’s arm can be seen through the glass bottle of translucent amber liquid lit by the candle, and shadows loom across the walls. Where the light does not reach – beneath the table – colour and form disappear altogether into blackness. Light and dark – as much as life and death – are the subjects of Wright’s dramatic, monumental canvas. 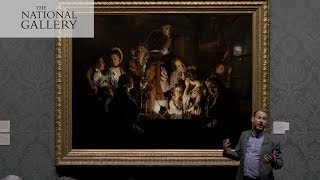 Joseph Wright hailed from Derby, a city at the centre of the Industrial Revolution. What can we learn from 'An Experiment on a Bird in the Air Pump' about this advancing time and how does this painting represent the Enlightenment that was taking plac...

Mr and Mrs Thomas Coltman
Joseph Wright 'of Derby'
Born in 1747, Thomas Coltman inherited Hagnaby Priory, near East Kirkby in Lincolnshire, in 1768. He and his wife Mary Barlow are portrayed here probably a year or so after their marriage in October 1789. The couple can also be seen in Wright’s great painting An Experiment on a Bird in the Air Pu...
Room 34