This scene tells the story of the murder of Saint Peter Martyr, a friar of the Dominican Order who was killed by members of the Cathars, a heretical sect whose teachings he had spoken against publicly. The saint is shown on the left – he has collapsed to his knees, an axe lodged in his skull. His killer makes a final blow to his chest with a dagger.

Until recent cleaning and restoration the picture was covered by layers of varnish which had darkened over time, as well as old repainting. The cleaning revealed the cleaver in the saint’s head, a characteristic feature of images of him. Cleaning also revealed that the dark tree trunks are interspersed with glimmers of bright summer light. This light is perhaps a promise of salvation – Peter’s life and his martyrdom for his faith led to him being declared a saint in 1253.

This scene tells the story of the murder of Saint Peter Martyr, a friar of the Dominican Order who was killed by members of the Cathar sect, whose teachings Peter and others had condemned as heresy. One of his murderers, Carino of Balsamo, later converted and became a Dominican himself. It’s highly unlikely that this was painted as an altarpiece – the narrative has no central focal point and is almost overwhelmed by the landscape setting, and the figures are on a small scale. It might have been painted for a meeting room or the side wall of a chapel.

If we read the picture from the top left, we move from expansive views to minute observations of nature – and to the violent drama of the scene. In the far distance, we see the peaks of a mountain range silhouetted against the light. Closer to us a winding road leads down the hillside to a walled town – complete with fortifications, towers and spires – which dominates the valley. This is probably Verona, where Saint Peter Martyr came from: two of the towers seem to represent the churches of Sant' Anastasia and San Zeno. A herdsman drives his cattle into the town. And in the bottom right corner, a little bird perches on a branch, near a scroll bearing Bellini’s signature.

The main action takes place far away from the serenity and order of the city and normal rural activities. On a dirt track in the forest two Dominican friars – they wear the Order’s black and white habits (uniform) – are pursued and attacked by the Cathar assassins. Saint Peter Martyr is shown on the left. He has collapsed to his knees, an axe lodged in his skull; his killer, Carino, makes the final blow to his chest with a dagger. The violence is screened by a thick copse of trees, and Bellini has placed a woodsman between the two assassins – he strikes at a tree trunk with his axe, emphasising the brutality of the event.

Until recent cleaning and restoration the picture was covered by layers of varnish which had darkened over time, as well as old repainting. The cleaning revealed the cleaver in Saint Peter’s head, a characteristic feature of images of him. Technical analysis also shows that the pose of his killer was altered during painting. The armour and helmet were afterthoughts, and Bellini eventually decided to show him in the act of plunging the dagger into the saint’s heart. The poses of the two pairs of figures are in fact identical to a version of the scene painted in 1509 by an artist close to Bellini (The Courtauld Gallery, London).

Cleaning also revealed that the dark tree trunks are interspersed with glimmers of bright summer light. This alternating rhythm of light and dark leads our attention rapidly from left to right, as though we are running alongside Peter’s companion as he flees his attacker. The glimpses of the sunlit pasture beyond might also be a promise of salvation – Peter’s life and his martyrdom for his faith led to him being declared a saint in 1253. By contrasting the claustrophobic enclosed track with the sunny mountains and bright sky, notably placed just above Peter’s head, Bellini seems to offer hope for redemption beyond the struggles of life and death.

The Assassination of Saint Peter Martyr 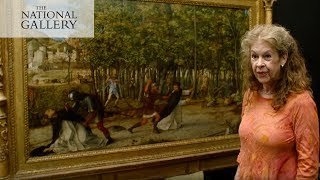 The assassination of Saint Peter Martyr

(Showing 6 of 15 works)
View all
A Dominican, with the Attributes of Saint Peter Martyr
Giovanni Bellini
In 1252 Saint Peter Martyr, a Dominican friar from Verona, was assassinated in an ambush by a group of heretics. This picture was once thought to be a ‘portrait’ of the saint: we can see the hilt of a dagger which has been plunged into his heart, and a cleaver lodged in his head.X-ray imagery sho...
Not on display
Doge Leonardo Loredan
Giovanni Bellini
Leonardo Loredan knows that he is being looked at, but he does not return our gaze. He is the doge, the ruler of the Venetian Republic; elected in 1501, he ruled until his death in 1521.He wears white silk damask robes woven with gold and silver metal thread, clothing reserved for the most splend...
Room 55
Madonna of the Meadow
Giovanni Bellini
The Virgin Mary adores the Christ Child sleeping on her lap. Giovanni Bellini was one of the first Italian painters to use natural settings to enhance the meaning of his pictures. Here, the still Virgin contrasts with the landscape, where the varying shapes of the clouds, from thin and wispy to f...
Room 55
Portrait of Fra Teodoro of Urbino as Saint Dominic
Giovanni Bellini
Room 55
Saint Jerome reading in a Landscape
Giovanni Bellini
An elderly man, barefoot and with an impressive grey beard, is perched on a rock, engrossed in a book. This is Saint Jerome, translator of the Bible into Latin. His only companion is an endearing lion which lies peaceably in the corner – he had tamed it by removing a thorn from its paw.Bellini pa...
Room 55
The Agony in the Garden
Giovanni Bellini
Christ’s disciple Judas – visible just beyond the river, leading a group of soldiers to Christ – has betrayed him. Aware of his imminent arrest and death, Christ prays; a cherub appears and presents him with a chalice. The chalice refers to the words of his prayer: ‘My Father, if it be possible,...
Room 55
The Blood of the Redeemer
Giovanni Bellini
Christ is shown resurrected after dying at the Crucifixion, his triumph over death reinforced by the way he cradles the Cross on which he was crucified. His body is weak and pale – we can see his ribcage, and his cheekbones stick out of his gaunt face. The focus of the image is the wound in Chris...
Room 55
The Dead Christ supported by Two Angels
Giovanni Bellini
This type of image of Christ after his death – close up, showing his naked torso – originated in Byzantium (the Eastern Christian empire) but was very popular in Italy from about the thirteenth century. It was supposed to promote meditation upon Christ’s suffering and death.Christ is supported by...
Not on display
The Virgin and Child
Giovanni Bellini
During the 1470s and 1480s Bellini produced a series of small-scale images of the Virgin and Child, destined for the homes of his Venetian patrons who used them as aids to private prayer.The naked Christ lies on a marble parapet, probably intended to recall his dead body in the tomb – a reminder...
Not on display
The Virgin and Child
Giovanni Bellini
Small-scale images of the Virgin and Child made for private worship were a speciality of Bellini’s. This picture was thought to be by the artist’s assistants, but recent technical analysis showed that it was made by Bellini. The holy figures are separated from a landscape by a cloth of honour, an...
Room 55
The Adoration of the Kings
Workshop of Giovanni Bellini
In order to meet the huge demand for his paintings, Giovanni Bellini had a large workshop of assistants who produced works in his style, under his supervision – like this one, which shows the Three Kings worshipping the infant Christ. According to the Gospel of Matthew they followed a star – we c...
Not on display
The Assassination of Saint Peter Martyr
Workshop of Giovanni Bellini
Room 55
The Circumcision
Workshop of Giovanni Bellini
According to the Gospel of Luke, Christ was circumcised, like all Jewish baby boys, when he was eight days old (Luke 2: 21). He is shown naked, sitting on a cushion upon a table or altar, clenching his little fists as a priest performs the ritual. His mother, the Virgin Mary, gently props him up;...
Not on display
The Virgin and Child
Workshop of Giovanni Bellini
Demand for Bellini’s small-scale images of the Virgin and Child was so high that he had a large workshop of assistants who worked under his supervision, producing paintings in his style.Here Christ is dressed in a white tunic, a gold cloth draped around his chubby body, and is propped up against...
Not on display
The Virgin and Child
Workshop of Giovanni Bellini
Small-scale images of the Virgin Mary and Christ Child made for private worship were one of Bellini’s specialities, and there was intense demand for them. Bellini had a large workshop of assistants who worked under his supervision, producing paintings in his style. This is one of those works, whi...
Not on display
You've viewed 6 of 15 paintings