Francesco Botticini, The Assumption of the Virgin

Key facts
The Assumption of the Virgin
Francesco Botticini
/

Heaven and earth are united in this vast, dramatic scene. A dome-shaped vault has opened up in the sky to reveal Christ blessing the Virgin Mary. She kneels before him, her hands together in prayer. They are surrounded by ranks of neatly ordered angelic beings, saints and Old Testament figures: the ageing couple beneath the Virgin are Adam and Eve, ancestors of the human race according to the Bible, wearing camel-skin robes.

The Virgin has ascended after death to join this place full of clouds and golden light. Her empty tomb below has filled with lilies, to the amazement of the apostles who gather around it. The image is based upon a poem by the Florentine apothecary, writer and politician Matteo Palmieri, who is shown kneeling to the left of the tomb, opposite his wife Niccolosa. The poem described the pre-existence of the soul before birth. As this was considered heretical by some, the couples' faces (now restored) were scratched out in protest.

This vast vision of heaven and earth was created for the funeral chapel of the Florentine apothecary, writer and politician Matteo Palmieri, who died in 1475. Palmieri and his wife, Niccolosa de‘ Serragli, are shown kneeling in prayer as they gaze towards the heavenly scene.

Christ sits at the centre of a gilded dome blessing those below. The Virgin Mary, crowned as Queen of Heaven, kneels before him. Below, angelic beings, saints and prophets are arranged in three neat circles. This shape may have been inspired by the architect Brunelleschi’s dome for Florence Cathedral, Santa Maria del Fiore, which had recently been completed. It also reflects the dome-shaped stage sets created by Brunelleschi to represent the vault of heaven in religious plays, popular in fifteenth-century Florence. The figures surrounding Christ and the Virgin are the six-winged red seraphim, the four-winged blue cherubim and, below them, the bust-length cherubic Thrones, so called because they were the carriers of God’s throne.

The middle sphere includes the Dominions, Virtues and Powers who rule the lower angels, the planets and humankind respectively. Below them are the angelic beings most associated with the earth, the Principalities; the Archangels, who deal with military and commercial matters; and the angels, God’s messengers to humankind. Scattered among the angels are saints and Old Testament figures. Adam and Eve are shown as an elderly couple dressed in animal skins; beneath them sits King David, who was known as a musician, with his lyre. On the left-hand side of the bottom row is Saint George, the warrior saint, dressed in gold armour and a blue mantle.

On a grassy plateau the apostles surround the Virgin’s empty tomb which, according to legend, was filled with lilies after her assumption to heaven. Just as much a feature of the picture is the panorama of the city of Florence, and the surrounding towns and countryside. The river Arno winds though towards Florence, where we see the dome of Santa Maria del Fiore. To Palmieri’s left is Fiesole, the hillside summer retreat of wealthy Florentines. Palmieri’s own farm and country villa are shown halfway up the slope. The large building that crowns the slope is the Badia Fiesolana, a former convent where the Duke of Florence, Cosimo de’ Medici, had granted Palmieri the patronage of a chapel. Just to the right of Palmieri’s eye is the spire of the church of San Pier Maggiore, where Palmieri would be buried and where this painting was installed.

According to Giorgio Vasari, Palmieri was involved in designing the picture. Vasari thought it was by Botticelli, but it is now known to be by his contemporary Botticini, who had illustrated the manuscript of Palmieri’s poem, the Città di Vita (‘City of Life’) in 1465.

The poem was based on Dante’s Divine Comedy which describes the journey of a soul through hell to heaven. Palmieri’s version, however, reverses this journey: the soul descends from the heavenly realm to earth, where it takes on a human form at birth and chooses, with free will, whether it will ascend to heaven or go to hell. The idea of the soul’s existence before birth and its ability to reach paradise without reference to God or Christ were contrary to the authorised teaching of the Church. The faces of Palmieri and his wife were scratched out (now restored) in an attempt to erase their presence and access to the painting was temporarily barred sometime in the decades following his death, when suspicions about the poem were at their height.

The Assumption of the Virgin
Francesco Botticini 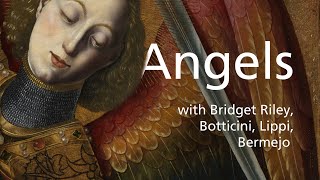 Joost Joustra, The Howard and Roberta Ahmanson Fellow in Art and Religion, decodes paintings of angels.