People are hard at work on boats beside the small island of San Pietro in Castello, the eastern part of Venice. While the nearby district of San Marco was popular with tourists, as it is today, this quieter corner of the city was largely a working-class neighbourhood. Its residents sailed between Venice and the mainland to trade.

Close to us, fishermen trail their nets. One boat, its sail being lowered by a man on board, is laden with hay and timber. Further to the left, more trading vessels are at anchor, their sails stirred by a gentle breeze. Beyond is the lagoon, with the Dolomite mountains in the hazy distance.

Over an arched wooden bridge, figures walk to and from a small complex of buildings. Until 1807, the church of San Pietro served as the city’s cathedral, while the Basilica di San Marco was the private church of the doge (the Venetian head of state).

People are hard at work on boats beside the small island of San Pietro in the area of Castello, which spans the eastern part of Venice. While the nearby district of San Marco was popular with tourists, as it is today, this quieter corner of the city was a largely working-class neighbourhood. Many of its residents were tradesmen and labourers, and they sailed between Venice and the mainland ports to trade.

Canaletto repeatedly used daily life in Venice, and ordinary Venetians, as inspiration for his pictures, while earlier Venetian view painters – Luca Carlevarijs in particular – largely concentrated on ceremonial scenes for tourists. Here, the foreground is a hive of activity. Close to us, fishermen trail their nets; one man leans over the side of his boat to haul in his catch, as do several others further back. To the far right, a gondolier moors up beside the bow of a larger vessel, its masts and rigging accurately observed. A gondola is rowed at pace past these stationary craft. One boat, laden with hay and timber, has arrived from the mainland, and its sail is lowered by a man on board as several others begin to unload the cargo. Further back, more trading vessels are at anchor, their sails stirred by a gentle breeze. Beyond is the lagoon, with the Dolomite mountains in the hazy distance.

Over an arched wooden bridge, figures walk to and from a small complex of buildings aglow in the bright sunlight. Until 1807, the grand church of San Pietro served as the city’s cathedral, while the Basilica di San Marco was the private church of the doge (the Venetian head of state). The patriarchal palace is between the church and its campanile (bell tower); the coat of arms above the third window are those of the Patriarch (bishop) Lorenzo Priuli (who died in 1601).

The painting was given to the National Gallery in 1879, together with another view by Canaletto, Venice: Entrance to the Cannaregio. The two pictures are of a similar size and were long considered pendants, but the difference in the scale of the figures suggests that Canaletto did not intended them to be hung as a pair. The warm, sultry sun on the buildings here is noticeably different to the cooler light of the other picture.

(Showing 6 of 16 works)
A Regatta on the Grand Canal
Canaletto
We have a magnificent view of the Grand Canal in Venice during the annual regatta, which was held on 2 February and attracted large numbers of visitors each year. All eyes are on the one-oared gondolas racing up the middle of the canal. Just right of centre two craft swing around the bend, tilted...
Room 38
Eton College
Canaletto
This view is from the bank of the River Thames, looking across a sprawling meadow towards Eton College on the horizon. A shady glade gives way to a softly lit landscape, with folk enjoying the summer’s day – a family group are picnicking while other people fish and boat nearby. A finely painted t...
Room 38
London: Interior of the Rotunda at Ranelagh
Canaletto
This painting shows the inside of the famous rotunda (demolished in 1805) at Ranelagh Gardens in Chelsea. Ranelegh opened in 1742 as one of London’s most prestigious pleasure gardens, and its main attraction was this vast circular building in which fashionable society could attend balls and liste...
Room 38
The Stonemason's Yard
Canaletto
This intimate view of Venice, weatherbeaten and dilapidated, is one of Canaletto’s masterpieces. In the early morning sun, workmen chisel away at pieces of stone. Everyday life continues around them: a mother rushes to comfort her crying child, watched by a woman on the balcony above.This square...
Room 39
Venice: A Regatta on the Grand Canal
Canaletto
This exhilarating scene shows the annual regatta (boat race) along Venice’s Grand Canal, and Canaletto has successfully captured the crowd’s excitement as the competitors skilfully manoeuvre their craft up the canal. Although many of the figures in the foreground have their backs to us, we still...
Not on display 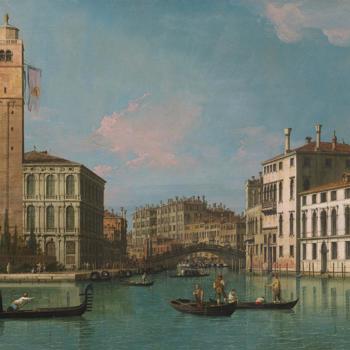 Venice: Entrance to the Cannaregio
Canaletto
Gondolas glide across the water, passing fishing boats which direct our gaze towards the mouth of the Cannaregio Canal, Venice’s largest waterway after the Grand Canal.The Ponte delle Guglie (‘bridge of the obelisks’) spans the water. We can just make out the tiny silhouettes of people crossing i...
Not on display
Venice: Palazzo Grimani
Canaletto
This work is almost a portrait of a building: the imposing facade of the Palazzo Grimani fills nearly the entire composition. Boatmen emerge from the left and right just in front of us, adding a sense of movement, while figures composed of dots and daubs of paint stand on the palace’s steps.Palaz...
Not on display
Venice: Piazza San Marco
Canaletto
This small picture shows the great Piazza San Marco – the most famous square in Venice. We look through an archway, stood in the shadows just behind a group of figures; it is as if we are walking past them along the colonnade. A vendor surrounded by baskets shows his wares to two gentlemen. A man...
Room 38
Venice: The Basin of San Marco on Ascension Day
Canaletto
Looking across the basin of San Marco, this vast view captures the scale and splendour of a ceremony taking place along the waterfront. Boats carrying spectators and animated gondoliers surround the gold and red state barge or Bucintoro, its upper deck crowded with figures. Every year on Ascensio...
Room 38
Venice: The Doge's Palace and the Riva degli Schiavoni
Canaletto
Beneath a sky of swirling cloud and warm sunlight, we take in a view of the Doge’s Palace, one of the best-known buildings in Venice. It overlooks a promenade known as the Riva degli Schiavoni and the basin of San Marco.Canaletto has given the scene a sense of tranquillity and calm. In the foregr...
Room 38
Venice: The Feast Day of Saint Roch
Canaletto
A crowd watches as state dignitaries and foreign ambassadors emerge from the church of San Rocco on the right of this painting. They have just attended a mass in honour of Saint Roch as part of the saint’s feast day, which was held in Venice every year on 16 August to celebrate his role in bringi...
Room 38
Venice: The Grand Canal with S. Simeone Piccolo
Canaletto
Canaletto’s sweeping view takes in everyday life on the Grand Canal. A stout helmsman stands aboard a finely decorated passenger barge to the left, while fishermen draw their nets in the centre. A boat carrying two women seems about to collide with one of the fishing vessels.Across the canal to t...
Room 38
Venice: The Piazza San Marco
Canaletto
We see the Piazza San Marco from just inside the colonnade of the Procuratie Nuove, which housed the procurators (or caretakers) of San Marco. Although painting one of Venice’s most famous sights, Canaletto took liberties with the architecture to create a dramatic composition, enlarging the size...
Room 38
Venice: S. Simeone Piccolo
Follower of Canaletto
We look across the Grand Canal towards the facade of the domed church of San Simeone Piccolo, completed in 1738 – it dwarfs the surrounding houses and a small workmen’s hut to the left. People potter along the quayside and climb the church’s steps to take a closer look. On the canal, several gond...
Not on display
Venice: The Grand Canal facing Santa Croce
Follower of Canaletto
Antonio Visentini engraved 38 paintings by Canaletto in his celebrated Urbis Venetiarum Prospectus, published in 1742 – this popular view was one of them. The collection of prints increased the artist’s fame and spread his work across Europe. This composition was widely reproduced in Canaletto’s...
Not on display
Venice: The Piazzetta from the Molo
Studio of Canaletto
This view is of the Piazzetta, an area between the Piazza San Marco and the waterfront (known as the Molo). Elegantly dressed Venetians and foreign visitors – like the trio at the bottom right – mill around the square, while government officials in black robes emerge from the Doge’s Palace.Beyond...
Not on display
You've viewed 6 of 16 paintings