Many artists in the Renaissance had patrons who commissioned paintings and supported them financially. Titian, the greatest European artist of his time, was lucky enough to have as his patron Prince Philip of Spain, who would later become the most powerful monarch in Europe. 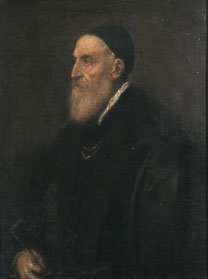 When working for Prince Philip, who later become the king of Spain,Titian enjoyed a remarkable level of freedom in his choice of subject. Letters survive that illuminate the relationship between this powerful European ruler and one of the greatest artists of all time.

Together, they redefined the roles of patron and artist, overlooking any mention of fees and contracts to pursue independent thought and creative achievement.

The resulting series of six large-format paintings appears to have evolved piecemeal over more than 10 years, with Titian himself suggesting the subjects and creating new and innovative compositions.

This level of respect and trust between the two men gave Titian free rein to create the most ambitious paintings of his career, including the masterpiece Diana and Actaeon.

The ageing Titian first met the young Prince Philip, aged 21, in 1548. They met through Philip's father, the Holy Roman Emperor, King Charles V of Spain, who was Titian's patron.

In 1550, Titian painted Philip's portrait: 'Portrait of Philip II as a Prince', which now hangs in the Museo Nacional del Prado, Madrid.

The portrait was a success and the prince soon became another of Titian's royal patrons.

Titian and the prince conceived the idea of a grand programme of paintings, with Titian suggesting themes to suit the tastes of his new patron.

The resulting 'poesie' (visual poems), as Titian called them, were perfectly pitched to appeal to this young, hot-blooded prince: the sensuous and titillating expanses of female flesh and the theme of hunting, all played out in the guise of ancient mythology.

The Greek and Roman mythological stories from Ovid’s 'Metamorphoses' provided Titian with six intriguing tales from a world where immortals played havoc with the lives of men and women. These six paintings share themes of seduction, disguise and power and 'Diana and Actaeon' is the last of the series.

The figures in the painting draw inspiration from famous sculptures from antiquity: the standing pose of Actaeon can be compared with the 'Apollo Belvedere', in the Vatican, Rome. The seated nymph recalls the 'Crouching Venus' now in the Louvre, Paris.

Titian combined his skill as a painter with a sensitivity for courtly pursuits and a desire to appeal to Philip's erudite knowledge.

The painter of princes

Titian was no stranger to such a notable patron as Philip, having painted for the dukes of Ferrara, Mantua and Urbino, Emperor Charles V and the Pope.

As a skilled and sensitive portrait painter, Titian was able to impress and flatter European leaders – indeed, his first commissions for the young Philip were portraits.

In 1556, when Titian was already engaged in the series of 'poesie' for Philip, the prince inherited the title of King of Spain on his father's abdication. Philip now ruled over one of the largest empires ever known.

Under King Philip II of Spain, the Spanish Empire reached the height of its powers. For Titian, working from Venice, this marked the pinnacle of his international fame.

The relationship was mutually beneficial: through Philip's patronage, Titian imagined himself as having achieved greatness on a par with the famed artists of antiquity.

Writing to the king in 1559, he compares their relationship to that of Alexander the Great and his court artist Apelles. While this was a familiar analogy used by biographers, it is exceptional to find an artist raising himself to these fabled ranks in his own words.

In return, Philip was the proud owner of the most ambitious paintings by Venice's greatest painter. 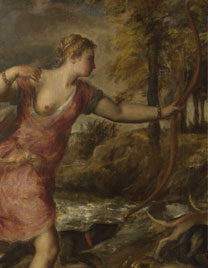 ‘Death of Actaeon’ was most probably painted for Philip II but remained in Titian’s studio after his death in 1576.

As symbols of excellent taste, eloquence and powerful patronage, the 'Poesie' paintings were unsurpassed.

They were used as diplomatic gifts, designed to impress other European rulers: in 1623, 'Diana and Actaeon' was packed up with another of the 'Poesie' paintings 'Diana and Callisto' to be delivered to the future King Charles I of England.

Intended to mark successful marriage negotiations, the wedding plans fell through and the paintings never travelled. Instead, the pictures were given to the French ambassador in 1704, as the first step in the paintings' journey that ended in British collections.

Where were the paintings displayed?

Although we know Titian intended the six paintings to hang together, it seems unlikely that Titian or Philip had a particular room in mind for the display of the 'poesie'.

During the period Titian was working on the paintings, the Spanish palaces underwent significant redecoration and the pictures go unmentioned in royal inventories until the following century.

In 1626 they were hanging in the king's summer apartment on the ground floor of the Alcázar castle in Madrid, which Philip II had remodelled as a royal palace.

Fit for a prince

'Diana and Actaeon' is truly a painting fit for a prince. It is a record of a special relationship between artist and patron that continued over the last twenty-five years of Titian's life and became the most important patronage of his career.

The painting says as much about the power of art and the status of a collector as it does about the ground-breaking invention and talents of its maker.