Image: Detail from Hans Holbein the Younger, 'The Ambassadors', 1533 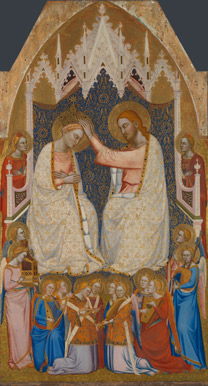 The use of mathematics transformed art in the Renaissance as artists learned how to create the illusion of three-dimensional space and shapes on a flat surface.

Painters understood how to create perspective in a painting with increasingly effective techniques. Titian employs popular techniques known as linear and aerial perspective in Diana and Actaeon.

But these techniques had taken many years to develop. Until the end of the fourteenth century, painters only varied the sizes of human figures to show how important they were. For example, in Jacopo di Cione's Coronation of the Virgin (1370-1), the saints are all the same size and yet they recede into the distance.

The Virgin Mary and Jesus are the biggest figures, as they are the most important figures in the painting.

Linear perspective (or the 'single point' system) is mathematically constructed so that all receding parallel lines appear to converge towards each other, eventually meeting at a single point, the vanishing point.

The horizontal lines of the columns and arch in 'Diana and Actaeon' demonstrate this method. Our eyes are guided in the direction of the vanishing point by other diagonal lines created by Diana and the three nymphs behind her, the top of the red curtain and Actaeon's arm.

Another example of this technique is Carlo Crivelli's The Annunciation, with Saint Emidius. 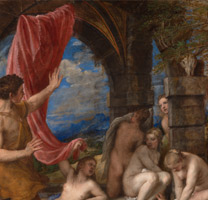 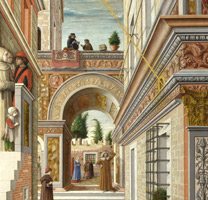 Detail from Carlo Crivelli, The Annunciation with Saint Emidius, 1486

Painters also used a technique known as foreshortening to strengthen the effect of linear perspective. By shortening the length of an object, the artist could create the impression that the object receded towards the vanishing point. We can see this in the foreshortening of Actaeon's arm.

Leonardo da Vinci, among others, observed that as a landscape recedes from the viewer, the colours and tones become less contrasted and blend into the blue colour of the sky.

The blue appearance of the sky is due to the fact that moving particles and molecules in the air scatter the shorter blue light waves, and this gives the overall impression that the sky is blue.

Similarly, the blue light reflecting off the landscape and objects in the distance is scattered and thus gives the impression that they are also blue. 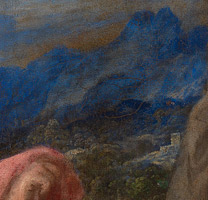 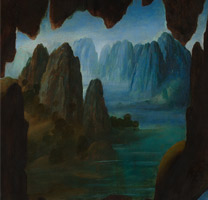 This effect can be achieved in a painting by creating gradual tonal changes between foreground and background so that the land and objects in the distance appear blue.

Because of the subtle gradation of colour required, the oil medium was best suited to achieving this illusion. The distant hills in 'Diana and Actaeon' show Titian's use of aerial perspective.

The 'Paragone' (literally, 'debate' in Italian) was a competitive drive between painters and sculptors during Titian's era. Sculptors claimed superiority over painters because they could bring the entire human form to life, whereas painters only saw figures from a single point of view.

Painters, however, argued for their authority in the 'Paragone' as they had the ability to show the human form in all its three-dimensionality. Titian illustrates this debate with the various positions of Diana and her five nymphs that allow us to see the human form from many different directions.

Maths and the human form

Artists like Titian learnt from the ancient Greek and Roman understanding of the proportions of the human form. Painters and sculptors flocked to Rome to study the recently discovered statues of the Roman Empire. 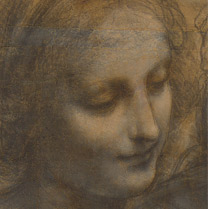 Detail from Leonardo da Vinci, The Burlington House Cartoon, about 1499-1500

Artists wanted to improve on their ancient predecessors and found this through their use of mathematics. We know from Leonardo da Vinci's notebooks that he developed a mathematical system for understanding the proportions of the human body.

For example, Leonardo da Vinci tells us that the distance between the middle of the nose to the bottom of the chin is half the length of the face, and the height of the body is the same as the width of outstretched arms. Titian's figures also illustrate this uniformity.