Just as he reinvigorated the Orientalist genre, Delacroix also completely revived flower painting, which had descended into a commercial decorative art by the middle of the 19th century. At the 1849 Paris Salon he unveiled monumental flower pieces bursting with life. These paintings might be read as vehicles through which the artist expressed his passionate feelings. Aptly, Baudelaire described Delacroix’s personality as “A volcanic crater concealed behind a bouquet of flowers.” 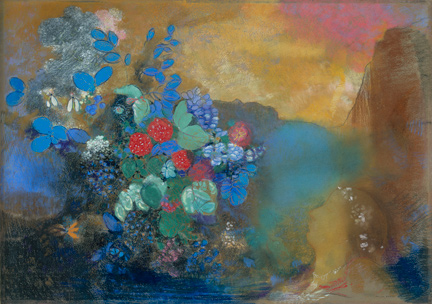 Odilon Redon, Ophelia among the Flowers, about 1905–8

It was not simply the energetic portrayal of flowers that was so important. To Delacroix, these compositions symbolised what he called “the music of painting”, by which he meant a first impression that addresses the senses before the subject is understood. For artists working at the end of the 19th century, Delacroix’s example in this genre became a means of exploring subjective feelings and dreams. One key follower was Odilon Redon. In Ophelia among the Flowers, Redon uses the jewel-like, slightly iridescent qualities of pastel to depict a dazzling bouquet of flowers against a backdrop of mountains. The blooms are scattered by a gentle breeze as they hover above the water in which Ophelia, from Shakespeare’s tragedy 'Hamlet', floats to her death by drowning. Redon’s depiction of Ophelia, with her eyes closed and face upturned, gives the entire work a dreamlike quality, transforming a flower piece into a scene of reverie.