In January 1832, Delacroix travelled in his capacity as an artist on a diplomatic mission to Morocco, where he stayed for six months. Prior to undertaking this journey he had painted so-called Oriental subjects from imagination. The results were somewhat stylised, a testament to the strength of mid-19th-century cultural stereotypes.

Experiencing North Africa for himself transformed Delacroix’s depictions of it. He began to infuse his subjects with a vibrancy and energy that reflected his belief that what he was painting was a “living antiquity”, where the culture and dignity of the people echoed the world of the Ancient Greeks and Romans. The vibrancy of the resulting pictures encouraged later artists, including Pierre-Auguste Renoir to journey to North Africa too. A comparison between ‘Convulsionists of Tangier’ of 1838 and Renoir's ‘Arab Festival’ of 1881 highlights both Delacroix’s innovations and his influence. 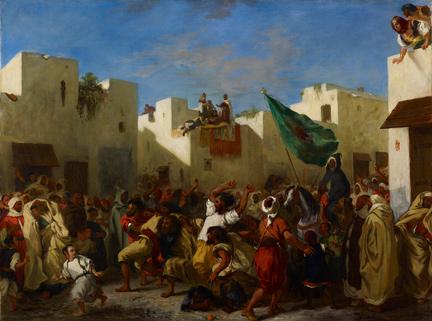 While in Morocco, Delacroix sketched the annual procession of the Aïssaoua, a mystic brotherhood of Sufi Muslims. During the procession, members of the group entered a trance-like state of religious fervour. This is ostensibly the subject of ‘Convulsionists of Tangier’, painted five years after Delacroix returned from Morocco. The artist commented that the interval between witnessing the scene and painting it meant that he had “forgotten the petty details so as to recall only the most striking and poetic aspect". He suggests the impression the scene made on him through bold composition, extravagant gestures, and strong colours.

‘Arab Festival’ by Renoir was painted after the artist had watched festival-goers surround a group of dancers and musicians in Algeria. They are depicted in a near-abstract frenzy of brushstrokes and colour. The similarity of their execution suggests that Renoir was reminded of Delacroix’s ‘Convulsionists of Tangier’ when he painted the scene. 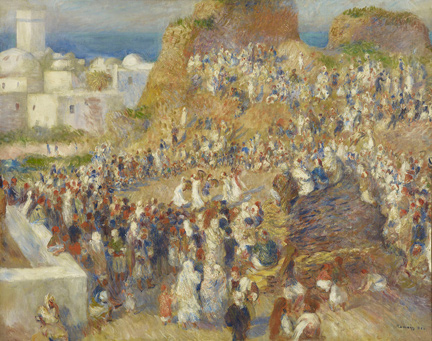