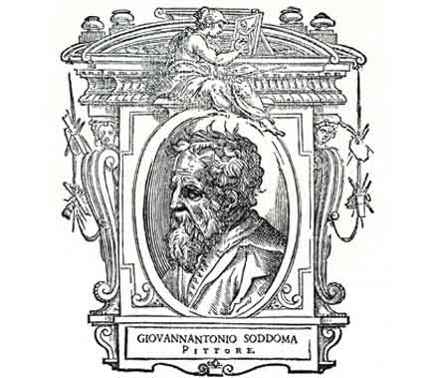 Giovanni Antonio Bazzi, known as Sodoma, was from Vercelli in northern Italy but worked in and near Siena. He was influenced by Leonardo in Milan, and Pintoricchio in Siena. He worked in Rome for Pope Julius II, but was soon displaced by Raphael, whose High Renaissance style he then absorbed. He spent the rest of his life in Siena. His art has a slightly provincial but vigorous air.

Saint Jerome in Penitence
Sodoma
Saint Jerome kneels in penitence in the wilderness, where he spent four years living as a hermit. He has discarded his red cardinal’s robes and hat, revealing his colossal, muscular body. The strong light emphasises the athleticism of his physique, casting his pensive face into shadow. He touches...
Not on display
The Madonna and Child with Saints and a Donor
Sodoma
This little painting for private devotion was almost certainly painted for the Olivetan monk who is being presented to the Virgin Mary and infant Christ by Saint Peter. Saint Catherine of Siena stands on the Virgin’s left. The two little keys hanging just below the monk’s elbow are cleverly echoe...
Not on display
The Madonna and Child
Possibly by Sodoma
In a remote landscape, the Virgin, who is dressed in modest robes, holds the infant Christ and offers him milk. The baby turns away from her breast and smiles at us.Images of the Virgin breastfeeding, known as ‘Virgo Lactans’, became popular during the Middle Ages as part of the increasing devoti...
Not on display
Head of Christ
Probably by Sodoma
After being condemned to death by Pontius Pilate, Christ was taken away by soldiers, crowned with thorns and called ‘King of the Jews’ (Matthew 27: 26–31). Although all the Gospels describe how Christ was led away to be crucified, only John tells us that he carried his own cross (John 19: 16–17)....
Not on display
The Nativity with the Infant Baptist and Shepherds
Follower of Sodoma
The Virgin Mary prays before the newborn Christ, who radiates heavenly light. Saint Joseph holds back the infant Saint John the Baptist, who holds a cross, a symbol of Christ’s destiny. It is unusual to find the infant John the Baptist included in an image of the Nativity.Two shepherds arrive on...
Not on display