The artist’s name strongly suggests that he was of French origin (‘Francés’ meaning ‘French’ in Spanish). Francés was principally active in León, in north-west Spain (then part of the Kingdom of Castile), where he developed a sophisticated International Gothic style, combining Italianate elements with naturalistic details.

Francés is first documented in 1434 as having completed the main altarpiece for the Cathedral of León. In addition to this, Francés produced murals, manuscript illuminations and cartoons for stained glass windows, running a busy workshop to help fulfil commissions. Among the few works securely attributed to Francés is a large polyptych dedicated to the Lives of the Virgin and Saint Francis in the Museo del Prado, Madrid. 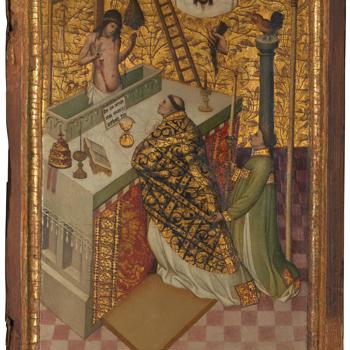 The Mass of Saint Gregory
Workshop of Nicolás Francés
Room 64