Rottenhammer was, with Elsheimer, amongst the most famous of the German painters active in Italy at the turn of the 17th century. Like Elsheimer, Rottenhammer succeeded in Italy with small-scale paintings on copper, such as 'The Coronation of the Virgin'. It is for these that he is best known today. He specialised in religious and mythological subjects.

Rottenhammer was born and trained in Munich, and remained active there until 1588. He was in Rome until about 1595/6, and then in Venice until 1606, where his best-known works were produced and where he was especially influenced by Tintoretto.

He subsequently worked again in Germany, painting large-scale narratives and allegories in Augsburg and Munich, where he died. 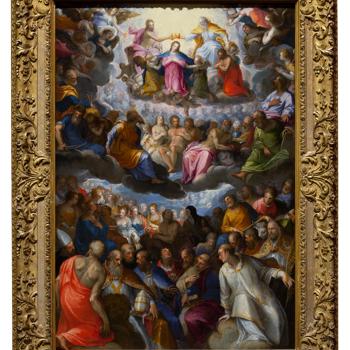 The Coronation of the Virgin
Johann Rottenhammer
This scene is set in heaven, and Rottenhammer has managed to convey its vast scale even in this small space: rows of angels, saints and prophets fill every inch of the painting, and the more distant figures are painted very faintly to create a feeling of expansiveness.At the top, surrounded by a...
Room 17