Altdorfer was one of the most outstanding landscape painters. He lived for most of his life in the city of Regensburg on the Danube. Often grouped with the so-called Danube School, his work included landscape and natural plant forms as expressive elements even in religious works, such as the Gallery's 'Christ taking Leave of his Mother'. He painted brightly coloured images rooted in German Late Gothic love of ornament, and in its poetic feeling for nature. He also worked as a draughtsman, designer and printmaker, and pursued a career as an architect and town councillor.

Altdorfer was born in about 1480 in Bavaria and was probably trained by his father Ulrich. He acquired rights of citizenship in Regensburg in 1505. During his lifetime various upheavals took place in the city, such as the conversion to Protestantism, and the expulsion of the Jews in 1519.

His works suggest a knowledge of Italian painting, although whether he visited Italy itself remains an open question. It is virtually certain that on more than one occasion he travelled along the Danube. Altdorfer died in 1538 after a successful political life, and a prosperous artistic one; it is thought that he had a fairly large workshop. 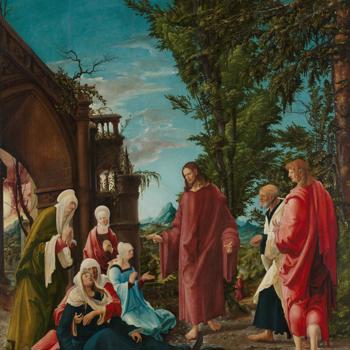 Christ taking Leave of his Mother
Albrecht Altdorfer
The Virgin Mary has collapsed with grief after learning that Christ, her son, has accepted his inevitable death as the will of God and is making to leave for Jerusalem. The episode is not recorded in the Bible, but it appears in a fourteenth-century German devotional text as well as in Passion pl...
Room 17 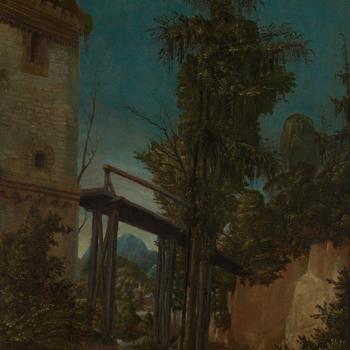 Landscape with a Footbridge
Albrecht Altdorfer
This scene probably doesn't represent a particular place but is rather an impression of the Danube valley, where Altdorfer lived. It is one of two paintings by Altdorfer without figures, which reflected the development of landscape painting as a subject in its own right.The low viewpoint emphasis...
Room 17