Gerard ter Borch specialised in painting miniature portraits in the 1640s, and later established a new type of small full-length portrait. He also depicted genre scenes. Both portraits and genre scenes are meticulously painted, with particular attention paid to the quality of the costumes, the textures of satins and silks.

Ter Borch was the son of a painter who had lived in Italy, Gerard ter Borch the Elder (1584 - 1662). He was born in Zwolle and was first trained by his father.

Early in his career he was in Amsterdam and Haarlem, and he then travelled widely in Europe. He attended the conference that led to the Treaty of Münster in 1648, portrayed in the Gallery's 'The Ratification of the Treaty of Münster'. Ter Borch settled in Deventer in 1654 and developed an individual style of genre painting. These works often showed figures in domestic interiors making music, reading or writing letters, and drinking. His most important pupil was Caspar Netscher.

A Woman playing a Lute to Two Men
Gerard ter Borch
Scenes of small groups of people making music were common in seventeenth-century Dutch painting. They reflected a popular social activity among sophisticated families and as such might symbolise the harmony of family life or friendship groups. But such parties were also an accepted way for young...
Room 27 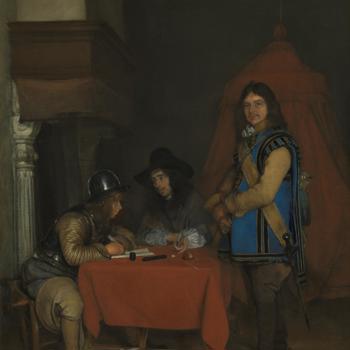 An Officer dictating a Letter
Gerard ter Borch
A young officer dictates a letter to another soldier. Meanwhile their comrade – in the impressive blue jerkin – stares directly out of the painting. He’s a messenger, waiting to deliver the letter. His faintly amused expression and the way he catches our eye creates a conspiratorial air: there’s...
Not on display
Portrait of a Young Man
Gerard ter Borch
In the early 1660s, when this portrait was made, this fancy outfit, bedecked with ruffles, ribbons and lace, was the height of sophisticated dressing, inspired by the latest fashions in Paris and employing the most expensive fabrics and tailoring.We don’t know who the sitter is, though it seems a...
Not on display
Portrait of Hermanna van der Cruis
Gerard ter Borch
This serious-looking woman is Hermanna van der Cruis. She was married to Abraham van Suchtelen, who held many posts in national and local government in the Netherlands. The portrait was probably made in the second half of the 1660s, when Hermanna was about 50, a wealthy widow and respected in the...
Not on display
The Ratification of the Treaty of Münster
Gerard ter Borch
This painting records a key moment in European political history: the confirmation of the treaty which formally granted independence to the Dutch nation from Spanish control in 1648. The key figures are the six Dutch and two Spanish delegates, shown in the centre swearing the treaty oath, and ter...
On display elsewhere