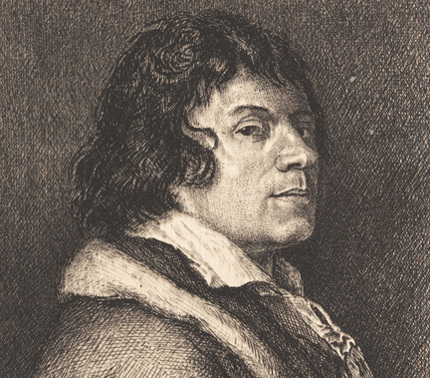 The son of a market employee at Les Halles, Paris, Michel was befriended by a farmer general named M. de Chalue, and in 1775 he began an apprenticeship with the history painter and professor at the Academy of Saint-Luc, Leduc. During the same period he was also painting and sketching in the open air.

From 1800 he worked at the Louvre as a restorer of Flemish and Dutch paintings, including works by Rembrandt, Jacob van Ruisdael and Meindert Hobbema, all of which had a decisive impact on his own work.

Michel always painted in a small area around Paris, including Montmartre and the plains of Saint-Denis. He became increasingly interested in the dramatic use of light and shade, and his mature work is characterised by stormy skies, broad brushstrokes and vivid contrasts. His paintings had a decisive impact on the Barbizon artists.

Stormy Landscape with Ruins on a Plain
Probably by Georges Michel
In the right foreground lies the ruined shell of what must have been a grand building. To the left of it stands a lone figure, bundled up in clothing that is blown to one side in the breeze. Behind the ruins the ground drops quite sharply to the plain, which is dotted with rows of trees in the ma...
Gallery A: Paintings after 1600
Landscape with Trees, Buildings and a Road
Style of Georges Michel
A track runs past a cottage into the distance. In the right background the roof of a further cottage is visible, and in the distance are a small clump of trees and a further cluster of houses. The foremost cottage is enclosed by a fence of logs and flanked by trees. This landscape is painted on t...
Not on display