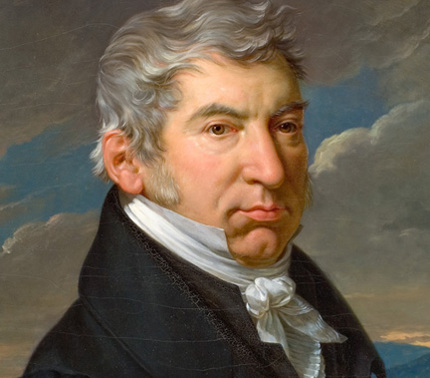 Fabre was trained by the French Neo-classical painter Jacques-Louis David. After winning the Prix de Rome in 1787 he spent four years in Rome. In 1793 he moved to Florence, where he became a successful society portraitist. He also turned increasingly to landscape.

While in Italy he built up a collection of 16th and 17th century Italian paintings and drawings and paintings by his French contemporaries. This collection, which was enriched by that of his friends the poet Vittorio Alfieri and his companion the Countess of Albany, was the basis of the Fabre museum in Montpellier.

Italian Landscape
François-Xavier Fabre
At the centre of the composition stands a building with four arches, the third of which leads to a furnace. In the foreground, a cart laden with fuel and drawn by two oxen is led by a man wearing a classical tunic. Smoke pours out of the vents in the tiled roof and the rolling storm clouds at th...
Gallery A: Paintings after 1600