Bernardo Daddi was one of the most important Florentine painters of the first half of the 14th century. He began his career as an apprentice in Giotto's workshop in Florence. While never losing sight of the grandeur and vision of his master, Daddi tempered Giotto's style with a refined softness and grace.

Daddi was particularly esteemed as a painter of small-scale images and made many portable altarpieces for private prayer. He did also create some larger scale paintings such as his 'Coronation of the Virgin' which are remarkable for the way in which they combine the intimate delicacy of the miniaturist with Giotto's grand style. 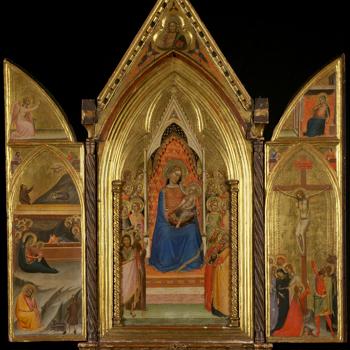