This winter, for the first time, revolutionary early paintings by the British modernist artist David Bomberg (1890–1957) will be displayed alongside National Gallery pictures that had a great influence on him.

Young Bomberg and the Old Masters will show nine outstanding Bomberg works together with paintings from the National Gallery which inspired him as a young radical growing up in London’s East End. They include Botticelli’s Portrait of a Young Man and Studio of El Greco’s The Agony in the Garden of Gethsemane.

They will be shown near Bomberg’s monumental masterpiece 'The Mud Bath' (1914, Tate), painted when he was only 23 years old. It echoes Michelangelo’s The Entombment in its composition and thrusting energy. Other works by Bomberg include the dramatic 'Vision of Ezekiel' (1912, Tate), inspired by the sudden death of his beloved mother Rebecca and the theme of the resurrection in the Old Testament; 'Ju-Jitsu' (c.1913, Tate), a geometrical and fractured painting based on his brother’s East End gym; and the spectacular 'In the Hold' (c.1913–14, Tate), where dockers appear to be unloading migrant adults and children from a ship. These Bomberg paintings will be shown with their preparatory drawings as well as his bold 'Self Portrait' (1913–14, National Portrait Gallery) and the highly controversial first version of his war painting 'Sappers at Work: A Canadian Tunnelling Company, Hill 60, St Eloi' (c.1918–19, Tate).

The exhibition is curated by award-winning art critic and historian Richard Cork, who will draw illuminating parallels between Bomberg’s early works and other National Gallery paintings which may have impacted on his compositions. The show will reveal how Bomberg embraced the art of the past in order to leap forward and contribute to the language of early 20th-century Modernism at its most audacious.

Hailed in 1914 as one of the most daring and original painters of his generation, Bomberg pushed his youthful art to its limits. If these works break away from tradition and show a strong dedication to avant-garde renewal, he later developed a more figurative style, rediscovering nature and making every effort to encapsulate its essential vulnerability. This progression in his style is due to his disillusionment with the modern world and the devastating violence of the machine age. Bomberg’s harrowing experiences in the trenches during the First World War – where he lost his brother and several close friends – profoundly changed his outlook on the world.

His early works gain their immense vigour from a fascinating paradox: while he was radically rejecting the traditional vision which overwhelmed many of his contemporaries, he was at the same time infusing his work with references drawn from the Old Masters whose art he admired and had assiduously copied as a teenager. Rather than imitating his favourite artists, like Botticelli and Michelangelo, he analysed and studied them closely in order to achieve his own audacious renewal.

'Even at his most rebellious and innovative, young Bomberg was enormously excited and stimulated by visiting the National Gallery and gaining crucial inspiration from the painters he admired there.'

Exhibition organised by the National Gallery in partnership with Tate.

The Sunley exhibition programme is supported by the Bernard Sunley Foundation.

The middle child of 11 siblings, David Bomberg was born in Birmingham in 1890 to Polish-Jewish immigrant parents. In 1895 his family moved to the East End of London where he was to spend the rest of his childhood. After studying under Walter Sickert, whose emphasis on the study of form and the representation of urban life had an important early influence on Bomberg, he was able to attend the Slade School of Art with help from the Jewish Education Aid Society. His draughtsmanship and technique were praised and as a teenager he had spent a great deal of time copying Old Masters in London’s major national collections – drawings which he later destroyed once he was able to formulate his own vision. 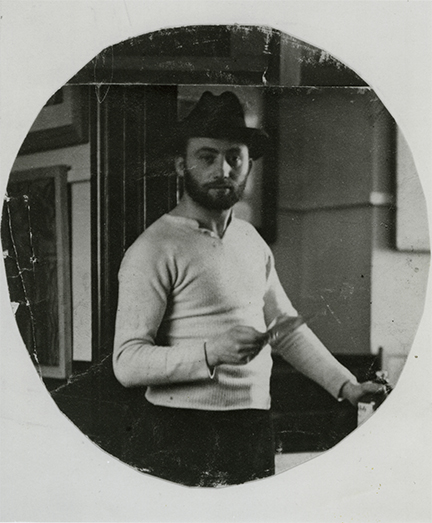 At the Slade he quickly developed his own distinctive style, breaking away from tradition, influenced perhaps by the works of the Post-Impressionists and Italian Futurists which he had seen in exhibitions in London in 1910 and 1912. He was subsequently expelled from the Slade in 1913 because of his radical approach, and his subsequent impassioned journey as an artist took him as far as Palestine, Cyprus, Morocco, the Soviet Union and Spain. He also taught celebrated artists like Frank Auerbach and Leon Kossoff.

For further information and images, please contact the National Gallery Press Office on 020 7747 2865 or email: press@ng-london.org.uk