Two paintings – one by the foremost figure in Swiss landscape painting during the 19th century and the other by the leading Norwegian artist of his day – have been generously gifted to the Nation.

British audiences are well aware of the landscape tradition of Constable and Turner, but these acquisitions of artists not widely represented in UK public collections will introduce them to skilled and innovative landscape painters from elsewhere in Europe, many of whom enjoyed great reputations during their lifetimes.

Asbjørn Lunde is the son of Norwegian émigrés to the United States. In 1950 he began practising as a lawyer in New York. In 1968 he started buying Scandinavian paintings, and today he is one of the leading collectors and experts of the landscape painters of 19th-century Scandinavia and Switzerland. Nowhere else can Norwegian and Swiss landscape painting be compared so directly and in such depth as in his collection. In 2011, 51 works from this collection were the focus of the hugely popular National Gallery Sunley Room exhibition, Forests, Rocks, Torrents: Norwegian and Swiss Landscapes from the Lunde Collection. 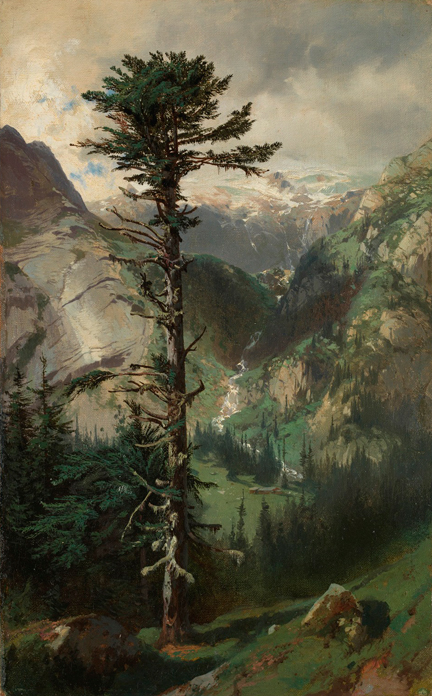 'At Handeck' (above) was executed high in the Haslital valley in the Bernese Alps. Positioned just to the left of centre, a lone, ancient pine tree appears to stand aside to offer the spectator a breath-taking view of the valley dropping away, at the bottom of which flows the river Aare. Calame has used a characteristic flat green in the valley which contrasts with the fine and delicate brushwork in the trees. A most striking element is the characteristic crispness of outline and flatness of colour in the rocks on either side of the valley. The Gallery owns one other painting by Calame, a studio work, The Lake of Thun (1854), which came with the Henry Vaughan Bequest in 1900. 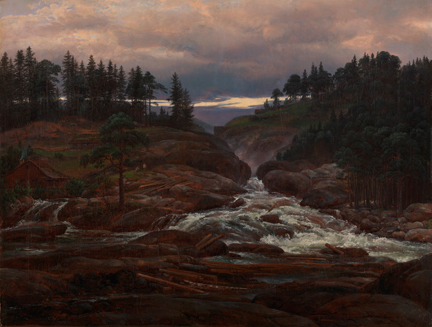 Johan Christian Dahl , 'The Lower Falls of the Labrofoss', 1827

The waterfalls of Labro – featured in The Lower Falls of the Labrofoss (above) – are located some 80 kilometres to the west of Oslo. The painting shows the lower of two falls there as the torrent spills from a declivity in the rocks, carrying with it tree trunks from lumbering operations upstream. Dahl probably visited the site on a sketching expedition to Norway in 1826, completing this work in his Dresden studio the following year. Today, the Labrofoss is the site of a hydroelectric power station. There are no other works by Dahl in the National Gallery.

“Asbjørn Lunde is remarkable in building a collection that traces the development, and shows the points of comparison, of two exciting modern landscape traditions.  These paintings, highlights of the collection, allow the National Gallery to show our visitors landscape painting across nineteenth-century Europe in greater detail than ever before.”

”The paintings gifted by Mr Lunde enrich an already wide-ranging collection of European 19th-century landscapes with two fine examples in the Romantic tradition. We are very grateful to him.”

Both works can be seen in Room C of the National Gallery alongside other 19th century paintings, including landscapes by Købke and Friedrich, and works by Corot, including The Four Times of the Day recently acquired for the Collection.

Johan Christian Dahl (1788 – 1857)
'The Lower Falls of the Labrofoss'
1827
Oil on canvas
51 x 66 cm
Presented by Mr Asbjørn Lunde through the American Friends of the National Gallery
Photo © The National Gallery, London

Johan Christian Dahl (1788–1857) was the leading Norwegian artist of his day and also one of the most important landscape painters of the Romantic era. He was born in Bergen, where his artistic talent was recognised early, given financial support, and in 1811 he was sent to study at the Copenhagen Academy.

Early on, he determined that Norway would be a central subject of his art, and set about learning landscape painting from both his contemporaries and the Dutch Old Masters. He also learned to make landscape oil sketches in nature which he would then use to work up elaborate ‘finished’ paintings in the studio. This method of working remained central to his practice throughout his career. Dahl relocated to Dresden in 1818, where he befriended Caspar David Friedrich (1774–1840), thus placing himself at the centre of the Romantic landscape tradition. Travels in Italy followed in 1820 and 1821, but he returned to Dresden to make his lifelong career there, becoming a professor at the Academy from 1824. From 1826, however, Dahl repeatedly returned to Norway, where he studied the ancient history and archaeology of his homeland and gathered landscape motifs.

Alexandre Calame (1810–1864) was one of the foremost figures in Swiss landscape painting during the nineteenth century. He spent his childhood in Vevey, Switzerland. In 1820 he lost the sight in one eye as the result of an accident while playing. His family moved to Geneva in 1824; two years later his father died, forcing Alexandre to support the family by working in a bank and colouring engraved landscapes for tourists. From 1829 he studied under François Diday, and in 1834 he opened his own studio. In 1835 he made his first trip to study the Bernese Oberland. From this time on he would spend his summers drawing and painting, sometimes with friends and pupils, in the Swiss mountains, using his studies from nature in his studio compositions. He also made trips in Europe, visiting Paris in 1837, the Netherlands and Germany in 1838, Italy in 1844 and London in 1850. Calame’s studio paintings were mostly produced on commission for middle-class and aristocratic clients who wanted a standard repertoire of Swiss motifs: glaciers, waterfalls, lakes, mountains, trees and snow. At the same time these grand Alpine landscapes reflect Calame’s Calvinist belief in the divinity of nature. Enjoying an international reputation during his lifetime, Calame was elected to eight national academies.