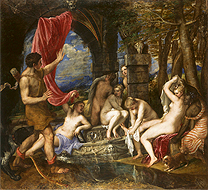 The painting is a special loan to London from the Bridgewater Collection, which hangs in the National Gallery of Scotland in Edinburgh. The public will have just four weeks to see Titian’s great masterpiece in London, before it returns to Scotland later in November 2008.

The National Galleries of Scotland and the National Gallery London have formed a partnership in an effort to raise the required funding to acquire the two Titians, and to obtain assurances concerning the loan of the rest of the Bridgewater Collection in Scotland. The current owner, the Duke of Sutherland, has offered the Galleries the chance to acquire the two works on extremely favourable terms.

The Galleries have until the end of this year to raise £50m to acquire Diana and Actaeon. If this is successful, we have also been offered assurances which we hope will secure the loan of the rest of the Bridgewater collection for the next 21 years, and the galleries will be offered an option to buy the second painting, Diana and Callisto for a similar amount by 2012. Both paintings will then go on a rotating display between London and Edinburgh, spending five years at a time in each location.

Diana and Actaeon will be shown in London alongside the National Gallery’s 'Death of Actaeon', Titian’s sequel to 'Diana and Actaeon', in which the luckless Actaeon is turned into a stag. This work was saved for the nation when it was acquired following a nationwide public appeal in 1972, and the two pictures will be reunited for the first time for two centuries.

'Diana and Actaeon' is one of six large-scale mythologies inspired by the Roman poet Ovid that Titian painted for King Philip II of Spain (Titian’s great portrait of whom features in Renaissance Faces, the exhibition running concurrently in the Sainsbury Wing).

Titian began the picture and its companion 'Diana and Callisto' in 1556, the year of Philip’s coronation. Spurred on by the prestige of royal patronage, he unleashed all his creativity to produce works of unprecedented beauty and inventiveness.

Titian worked for three years to perfect these masterpieces, which were shipped to Spain in 1559. He claimed their lengthy genesis was due to the relentless pains he took to make sumptuous works of art worthy of the king.

'Diana and Actaeon' depicts the fatal consequences of a mortal tragically caught up in the affairs of the gods. It is remarkable for its powerful dramatization of extremes of human emotion. With its rich array of colours, contrasting textures and dreamy atmospheric effects it is also a work of ineffable lyrical beauty.

The campaign to save the Titian’s received a boost last week, with the announcement that The Art Fund - the UK’s leading independent art charity - is donating £1 million, the largest grant for a single work of art in its 105 year history.

Over 60 artists from all over the UK have also joined the campaign to save the Titians. In a special gesture of support, Lucian Freud has given his approval for his 'Self-Portrait' to hang in the National Galleries of Scotland next to the 'Self-Portrait' by Rembrandt, whilst the Titian is in London.

Diana and Actaeon has never been lent to any public gallery other than the National Gallery of Scotland. Its display in London is an extraordinary opportunity to see one of the greatest of all European paintings in an entirely different context. It is also part of our joint campaign to secure not only this painting and its pair for the British public, but help assure the future of all the masterpieces in the Bridgewater Loan for the National Gallery of Scotland for decades to come.

John Leighton, Director-General of the National Galleries of Scotland said:

We have a matter of weeks to raise £50m to secure the future of one of the greatest paintings in the world for the British public. The response so far has been tremendous and we hope that the display of the Titian in London will encourage even more people to back our campaign.