Five of Titian’s greatest works, his epic series of large-scale mythological paintings, the 'poesie', will be brought together for the first time since 1704 at the National Gallery next March. 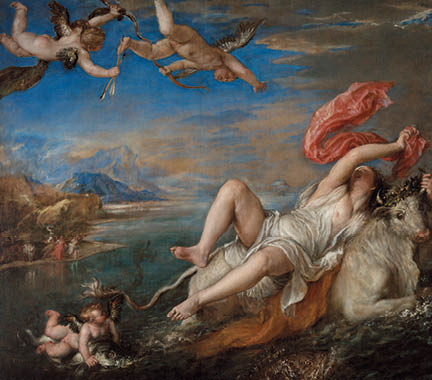 Painted between about 1551 and 1562 the 'poesie' are among the most original visual interpretations of Classical myth of the early modern era and are touchstone works in the history of European painting for their rich, expressive rendering.

The series was commissioned by Philip II of Spain, who highly unusually gave Titian an open brief to select his subjects. The paintings depict stories from Classical mythology, primarily drawn from the Roman poet Ovid’s Metamorphoses. Because he considered them visual equivalents to poetry, Titian called them his ‘poesie’. He distilled in them the knowledge of painting and visual storytelling that he had acquired over five decades as an artist to create some of his most profound statements on human passion and irrationality, on love and death.

From the original cycle of six paintings, the exhibition will reunite 'Danaë' (1551–3, The Wellington Collection, Apsley House); 'Venus and Adonis' (1554, Prado, Madrid); Diana and Actaeon (1556–9) and Diana and Callisto, (1556–9) jointly owned by the National Gallery and the National Galleries of Scotland; and 'Rape of Europa' (1562) from the Isabella Stewart Gardner Museum, Boston.

The National Gallery’s own Death of Actaeon (1559–75), originally conceived as part of the series, but only executed much later and never delivered, will also be included in London.

Following the London exhibition, the 'poesie' will travel to the Scottish National Gallery, Edinburgh, the Prado, Madrid, and the Isabella Stewart Gardner Museum, Boston.

The Sunley exhibition programme is supported by The Bernard Sunley Foundation