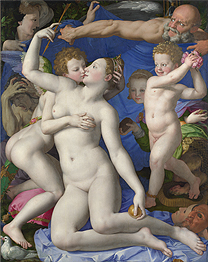 Bronzino An Allegory with Venus and Cupid, 1540-50

Composing Through Art is an innovative collaboration between the National Gallery and the London Chamber Orchestra, in which students from across the UK studying music, composition and sound design will have the opportunity to discuss affinities between music and painting in relation to the National Gallery’s collection.

Young composers participating in this thought-provoking project will be asked to write a composition to be submitted in March 2009. The piece will be inspired by Bronzino’s painting An Allegory with Venus and Cupid, (probably 1540–50).

Notorious for its ambivalence, eroticism and obscure imagery, Bronzino’s painting is a thrilling and layered stimulus for composers.

'An Allegory with Venus and Cupid' was chosen based on the myriad of visceral themes and connotations, which still resonate in modern life. The appearance of the painting generously lends itself to the musical imagination through the colliding themes of Olympian decadence versus the darkest corners of human temptation.

Controversial and macabre, the composition tactically draws you into the three main themes of Lust, Jealousy and Deceit. Each simultaneously stand as isolated comments and together create a single judgement on the nature of sin.

The painting itself is structured as a whirlwind of themes and figures supporting a central motif. This automatically provides a composer with a multitude of paths, ranging from a single musical representation of the core Venus/Cupid relationship, or the surrounding influencing forces, to the abstraction of the compositional whole.

With the help of experts, including LCO resident composer Graham Fitkin, George Fenton (composer for Planet Earth and Blue Planet) and musician David Gordon, the young composers will examine the themes and figures, shapes, colours, rhythms and forms found within the painting.

Musical investigations of the Italian and French stylistic nature characteristic of Bronzino’s work should also contribute to the idea that music can act to disembody and make imagery that is representative.

We are hopeful that here, the music will begin where the painting ends.

Students will be invited to attend a study day on 20 November 2008, where they will examine tone, harmony, composition, rhythm, atmosphere and colour. Selected compositions will be recorded in a public workshop, receive publication and be performed in two concerts as part of LCO New: Explore.

On 6 May 2009 the London Chamber Orchestra will perform a special concert of the selected students’ work at St John’s, Smith Square. There will also be a concert at the National Gallery in front of Bronzino’s 'An Allegory with Venus and Cupid' on 5 June 2009.

The selected students’ work will be featured on the National Gallery’s website and LCO’s website from July 2009.

Composing Through Art offers young composers the chance to write for a world-class orchestra, enabling the experimentation and development of their ensemble writing skills. Selected compositions are to be recorded in a public workshop, published, and given further concert performances by members of LCO in St. John’s, Smith Square and in front of ‘An Allegory with Venus and Cupid’ in the National Gallery.

The London Chamber Orchestra, founded in 1921 is Britain’s oldest chamber orchestra. A body of performers totally 35 players, it has at it heart British musicians at the top of their field as soloists, leaders and principal players elsewhere in the music profession. LCO’s lynchpin in Music Director and Principal Conductor Christopher Warren-Green. Christopher’s association with LCO as Music Director began in 1988; he is now a sought after conductor around the world.

The collection belongs to the nation and serves a diverse public from the UK and overseas. It is open to all, 361 days of the year, free of charge. Between 4 and 5 million people visit the National Gallery each year.

Almost all of the 2,300 paintings in the National Gallery’s collection are on permanent display. The collection represents the greatest Western European painters including van Eyck, Raphael, Leonardo da Vinci, Turner, Rembrandt, Degas, Cézanne, Van Gogh, Renoir, Monet, Rubens, Velázquez, Van Dyck, Titian and Bellini. The Gallery’s key objectives are to enhance the collection, care for the collection and provide the best possible access to visitors.

An Allegory with Venus and Cupid
Bronzino
about 1545
Tag: Painting
Read more