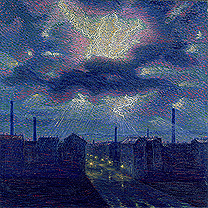 By the end of the 19th century, the fledgling Italian state faced economic crisis, political uncertainty and widespread social unrest. The unification of Italy, largely accomplished by 1871, had promised the Italian people an idealised vision of democracy and national progress. The reality left many feeling alienated and disillusioned. Artists, moreover, feared that contemporary Italian painting was lagging far behind that of other European nations. History and art had come to a crucial turning point.

In northern Italy, a loosely knit group of avant-garde artists, who would come to be known as Divisionists, began in the final decades of the century to mount a radical artistic response to contemporary conditions. What they achieved came to define their age.

Radical Light is the largest show of its kind to be held in the UK, and one of the first outside Italy to examine this vital movement. Comprising over fifty works by the most influential Divisionist painters, the exhibition includes rare loans from private collections (Umberto Boccioni, 'Workshops at Porta Romana', 1908) and the public collections of Europe and North America.

Through ‘the investigation of colour in light’ (Giovanni Segantini), the Divisionists sought to challenge the paradoxes of the modern world. Influenced by the study of optical science, they believed unmixed threads of ‘divided’ colour would fuse for the viewer at a distance and bring maximum luminosity to their paintings. This technical innovation accounts for the singular intensity of their paintings.

Many of the key Divisionists were also politically motivated. From the early 1890s, Giovanni Segantini, Angelo Morbelli and Emilio Longoni, among others, adopted Socialist ideas and strove for ’an art not for art’s sake but for humanity’s sake’ (Giuseppe Pellizza, 1892). From Longoni’s 'The Orator of the Strike', 1890–1 (Private collection) to Boccioni’s hypnotic masterpiece 'The City Rises', 1910–11 (MoMA, New York), the exhibition explores the evolution of Divisionism from its early beginnings to the formation of Italian Futurism, which emerged organically from this earlier movement.

As thousands of workers migrated from the fields to the cities, many Divisionists abandoned the bleak modernity of Milan and Turin for the countryside. Segantini escaped to the Swiss Alps where the solitude of the mountains inspired some of his greatest works, including the exultant 'Spring in the Alps', 1897 (Private collection) and 'The Punishment of Lust', 1896/7 (Kunsthaus, Zurich).

Giuseppe Pellizza returned to his rural birthplace, Volpedo, where he became an agent for social change, championing the cause of the workers on his estate. In 'The Living Torrent', 1895–6 (Pinacoteca di Brera, Milan), Pellizza depicts the unstoppable progress of the proletariat – employing his own workers as models for the crowd – advancing towards the light of social justice. Nearby, Angelo Morbelli returned to the rice fields of Piedmont, where he took up the cause of the oppressed women rice workers in 'For Eighty Cents!', 1893–5 (Museo Borgogna). In Milan, he also chronicled the lives of the urban poor and elderly.

Working high above Lake Maggiore, the art dealer, painter and critic, Vittore Grubicy, achieved a series of masterful bucolic landscapes, including his eight-canvas polyptych 'Winter in the Mountains', 1894–1911, (Milan, Civiche Raccolte d’Arte), seen by many as the manifesto of Divisionism. Grubicy is credited as being the first apostle and most influential propagandist of the movement. After discovering Giovanni Segantini in the early 1880s, he acted as mentor and patron to several key Divisionists, including Longoni, Morbelli and Previati.

Despite this considerable artistic exchange, the Divisionists failed to achieve the cohesion necessary to enter the broad international consciousness. Yet the plurality of their vision is equally what makes the movement so distinctive and dynamic.

Radical Light is organised jointly by the National Gallery, London, and the Kunsthaus, Zurich, where the exhibition will follow from 26 September 2008 to 11 January 2009. The exhibition is curated by Simonetta Fraquelli, with Christopher Riopelle of the National Gallery as coordinating curator in London, and Tobia Bezzola of the Kunsthaus as coordinating curator in Zurich.

Simonetta Fraquelli is an independent art historian and a specialist in Italian art in the twentieth century. Giovanna Ginex is an expert on Divisionist painting. Vivien Greene is Associate Curator at the Solomon R. Guggenheim Museum, New York. Aurora Scotti Tosini is an expert on Divisionist painting and technique. Lara Pucci is a British Academy Postdoctoral Fellow at the University of Manchester. Linda Schädler is assistant curator at the Kunsthaus, Zurich.

Publicity images for 'Radical Light: Italy’s Divisionist Painters 1891–1910' can be obtained from http://press.ng-london.org.uk. To obtain a username please contact the National Gallery Press Office on 020 7747 2865 or email press@ng-london.org.uk