With a focus on buildings and other structures in Claude Monet’s works, this is the first exhibition devoted to the artist’s relationship with architecture, and invites us to see the ‘Father of Impressionism’ in an entirely new way. With more than seventy paintings by Monet, the exhibition spans his long career from its beginnings in the mid-1860s to the public display of his Venice paintings in 1912.

Buildings played substantial, diverse, and unexpected roles in Monet’s pictures. He painted historic structures such as Rouen Cathedral, and strikingly modern ones such as the Gare Saint-Lazare, Paris. As a daring young artist he exhibited in the Impressionist shows of the 1870s and displayed canvases of the bridges and buildings of suburban Paris. Much later as an elderly man, he depicted the splendid architecture of Venice. Visiting London as a tourist Monet presents sites we all recognise – the Houses of Parliament, Waterloo Bridge, and Charing Cross Bridge – and reflects them back to us through his unique vision. For Monet, a building could represent the human presence or function as a compositional element.

From Monet’s depictions of villages and picturesque settings, through his exploration of the modern city, and ending with his monumental series of works portraying Rouen Cathedral; the exhibition features loans from public and private collections from around the world, many of which have never been seen in the UK before.

Exhibition sponsored by Credit Suisse, Partner of the National Gallery

This exhibition is the first ever devoted to the relationship between two of the greatest artists of the Italian Renaissance; Giovanni Bellini and Andrea Mantegna. Through major loans of paintings, drawings – and particularly sculpture which greatly influenced both artists throughout their careers – the exhibition compares the work of these important artists who also happened to be related by marriage.

Andrea Mantegna, 'The Agony in the Garden', about 1458–60
© The National Gallery, London

Giovanni Bellini, 'The Agony in the Garden', about 1465 © The National Gallery, London

At the core of the exhibition are two historic juxtapositions of Mantegna and Bellini’s work: depictions of 'The Agony in the Garden', which have hung side by side in the National Gallery since the late 19th century, as well as two paintings of 'The Presentation at the Temple' (Mantegna’s version of which is in the Gemäldegalerie, Berlin and Bellini’s in the Fondazione Querini Stampalia, Venice).

Both works were painted in the decade after Mantegna married Niccolosa, Bellini’s half-sister, by which time the artists must have known each other well. The paintings reveal compositional similarities, yet they also represent the talents particular to each.

In 1460, Mantegna moved to Mantua where he occupied the post of court painter to the ruling Gonzaga family until his death in 1506. Bellini, who died 10 years later, spent his entire career in Republican Venice. Despite the distance between them, their work provides evidence of their continuing creative artistic exchange for the rest of their long lives.

Exhibition organised by the National Gallery and the Staatliche Museen zu Berlin.

DRAWN IN COLOUR
DEGAS FROM THE BURRELL

The Burrell Collection holds one of the greatest collections of Degas’s works in the world, encompassing pieces from every period of the artist’s career. Rarely seen in public, this will be the first time that most of these works will be shown outside Scotland since they were acquired.

Degas was one of the greatest artistic innovators of his age. He eschewed the traditional subjects and technical conventions of his training to find new ways to depict modern Parisian life. Returning throughout his career to a handful of subjects including the ballet, horse racing, and the private world of women at
their toilette, he pursued a remarkably individual vision, distinct from that of his fellow Impressionists.

Among Degas’s many contributions to the development of art was a relentless experimentation with materials, particularly with the supremely flexible medium of pastel that he came to prefer over oil paint. Pastel became increasingly important to Degas in his later years as brilliant colour became a feature of the contemporary art he admired, and as his own eyesight began to fail. The tactile immediacy and luminous colours characteristic of pastels allowed him to create astonishingly bold works of modern art.

Including complementary works by Degas from the National Gallery Collection, this exhibition offers unique insight into the working practices and preoccupations of a complex and intensely private artist. Marking the centenary of Degas’s death on 27 September 1917, the display is also a fitting tribute to one of the greatest creative forces of late 19th- and early 20th-century French art.

Exhibition organised by the National Gallery in collaboration with the Burrell Collection, Glasgow.

Thomas Cole (1801–1848) was one of the leading American painters of the mid-19th century, but his work is seldom seen outside the United States. This will be the first exhibition to establish Cole as a major global figure in 19th-century landscape art, featuring a rare display of the monumental painting cycle 'The Course of Empire' (1833–36 New-York Historical Society). 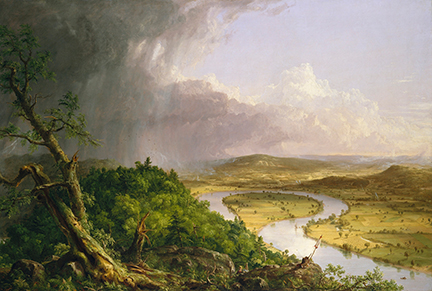 Thomas Cole, 'View from Mount Holyoke, Northampton, Massachusetts', after a Thunderstorm – The Oxbow, 1836 © The Metropolitan Museum of Art, New York

The dialogue between Thomas Cole and European artists of the mid-19th century will be brought to light by the juxtaposition of British-born Cole’s works with those of Joseph Mallord William Turner and John Constable, among others. By exploring the impact of Cole’s journeys to England and Italy between 1829 and 1833, we will gain a better understanding of how his exposure to European painting informed his artistic identity.

This exhibition will also provide a vivid new context for 'The Oxbow' (1836, The Metropolitan Museum of Art), a founding masterpiece of American landscape painting which will be on view for the first time in the UK. While traditionally celebrated as a defining work in the history of American painting, 'The Oxbow' is reinterpreted here as the triumphant result of the artist’s self-conscious engagement with European art.

Exhibition organised by the National Gallery and the Metropolitan Museum of Art, New York.

Lorenzo Lotto was one of the most fascinating artists of the early 16th century. Known predominantly for his portraits and religious paintings, his works are characterised by expressive sensitivity and immediacy. All are recognisable for their deeply saturated colours and bold use of shadow. This will be the first exhibition of Lotto’s portraits in the UK. 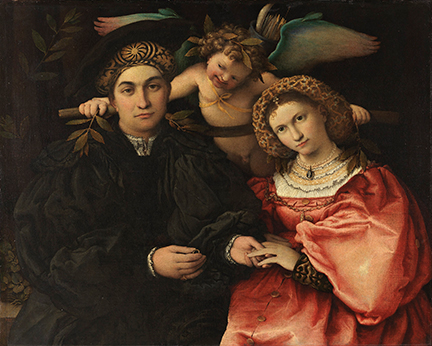 Celebrated as one of the greatest portraitists of the Italian Renaissance, Lotto uniquely portrayed a cross section of middle-class sitters, among them clerics, merchants, and humanists. He depicted men, women, and children in compositions embedded with symbolism and imbued with great psychological depth. The prominent addition of objects which hinted at the social status, interests, and aspirations of his subjects added meaning to each work.

Some of these objects, including carpets, sculpture, jewellery, and other personal belongings will be displayed as part of the exhibition.

A significant amount of information pertaining to Lotto’s sitters is available, mainly due to his partially intact account books which offer details about their identities, the prices of the works, and the ways in which they were created. Some of these documents will also be on view in the exhibition.

Exhibition organised by the National Gallery and the Museo Nacional del Prado, Madrid.

LAKE KEITELE
A VISION OF FINLAND

Lake Keitele with its silvery tonalities, cool elegance, and almost hypnotic intensity, is among the most popular paintings in the National Gallery Collection, and just one in a spectacular series of paintings of this northern landscape by Akseli Gallen-Kallela.

All four versions of the Lake Keitele composition (two from private collections and one from the Lahti Art Museum/Viipuri Foundation, Finland) will be reunited and shown side by side, in the order they were made; reflecting the artist’s gradual shift from an observed, naturalistic landscape to a highly stylised and abstracted image. Juxtaposing the works will also highlight the rich, multi-layered symbolism the image conveys, as well as accentuating the striking visual impact of the motif.

A leading figure in modern Finnish painting, Gallen-Kallela first worked at Lake Keitele, north of Helsinki, in the summer of 1904. He was mesmerised by the beauty of the Finnish landscape and fascinated by meteorological phenomena. This midsummer view of the lake soon became one of the artist’s signature images thanks to the sublime clarity of its motif. It reoccurs throughout Gallen-Kallela’s career well into the 1920s.

The Lake Keitele paintings will also be contextualised within the output of the international avant-gardes with which Gallen-Kallela was in contact during much of his working life. On view will be more than a dozen works by the artist, most on loan from public and private Finnish collections.

MURILLO
THE SELF PORTRAITS

Marking the 400th anniversary of the birth of Bartolomé Esteban Murillo this display reunites the artist’s only two known self-portraits for the first time in over three hundred years. 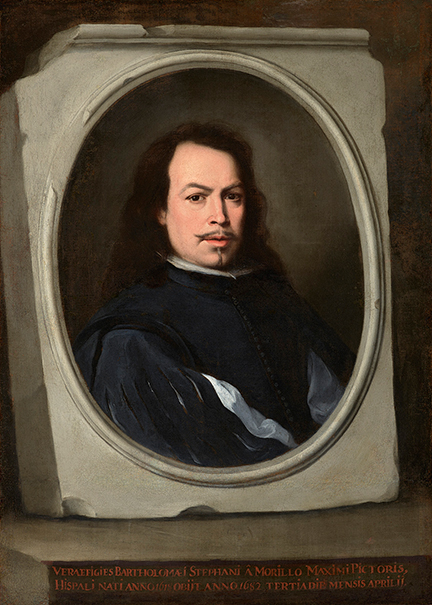 One of the most celebrated painters of the Spanish Golden Age, Murillo worked primarily in his birthplace, Seville, all his life. Well known for his religious paintings and his extraordinary depictions of street children, he was also an ingenious portraitist, although this aspect of his oeuvre has been infrequently studied.

The first 'Self-Portrait' (about 1650–55), now in the Frick Collection, New York, shows Murillo in his thirties; his image supposedly painted onto a stone block. He is elegantly dressed, wearing the stiff collar known as a 'golilla', but with no evidence of his profession as a painter.

His later Self Portrait, in the National Gallery Collection, shows Murillo roughly twenty years older. The ageing artist is shown with the tools of his trade – a red chalk drawing, compass, and painter’s palette are among objects arranged on a ledge – and his right hand projects out of the trompe l’oeil stone frame which surrounds him.

There will be approximately ten additional works in the exhibition, including other paintings by Murillo and later reproductions of the two paintings that reflect their fame in Europe.

Exhibition organised by the National Gallery and the Frick Collection, New York.

Ed Ruscha has shaped the way we see the American landscape over the span of his influential six-decade career. Elegant, highly distilled, and often humorous, Ruscha’s work conveys a unique brand of visual American zen. 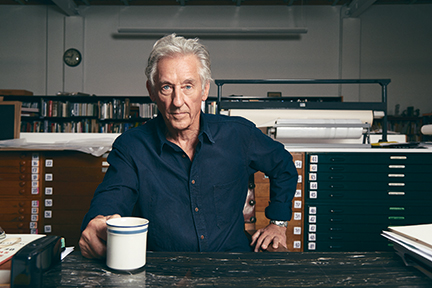 © Photography by Manfredi Gioacchini. Courtesy of Ed Ruscha and Gagosian

In 2005, Ruscha was asked to represent the United States at the 51st Venice Biennale. Dealing with the theme of “progress, or the course of progress,” Ruscha’s Biennale installation evoked Thomas Cole’s famous painting cycle of 1833–36, 'The Course of Empire' (on display in the Ground Floor Galleries concurrently with this exhibition).

Unlike Cole’s grandiose vision of the rise and fall of a classical civilisation, Ruscha’s 'Course of Empire' (2005) focuses on the industrial buildings of Los Angeles – simple, box-like, utilitarian structures with no pretension to beauty but redolent of economic might and global reach.