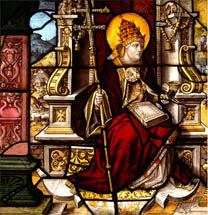 This exhibition, the first of its kind at the National Gallery, sets out to demonstrate that the best stained glass from the Renaissance period fully reflected – and even rivalled – the latest developments in painting, while exploiting to the full the vibrant properties of light.

'Art of Light: German Renaissance Stained Glass' brings together a group of some of the finest examples of fifteenth- and early sixteenth-century German stained glass from the Victoria and Albert Museum collection – and juxtaposes them with a selection of National Gallery paintings from the same period and from the same regions of Germany, along with some surviving examples of designs for stained glass.

Many of the fifteenth- and early sixteenth-century German paintings in the National Gallery originally hung in ecclesiastical settings, which frequently also included brilliantly coloured, boldly designed and exquisitely made stained glass windows. German stained glass of this period made use of the same imagery as painting, showed similar visual innovations and, increasingly, the designers of stained glass windows were also painters of panel pictures.

The first section of the exhibition includes a meeting between an early Austrian panel of the Trinity in the National Gallery’s collection and a panel of Austrian stained glass depicting the Annunciation to Saint Anne. Stylistically alike, both feature angels with tall, upswept wings, and similar thrones: the deep red glazes used in the painting are mirrored by the deep red patterned background of the glass. Other comparisons include those illustrating how the same subject matter was used in both windows and small devotional paintings, for example the standing Virgin and Child in Glory, and the Presentation of Christ in the Temple.

There will be a special focus – including prints, drawings, paintings and glass – on three important early sixteenth century artists who designed for stained glass as well as creating paintings: Albrecht Dürer, Hans Baldung Grien and Jörg Breu. The exhibition ends with a full-scale recreation of one of the extraordinary multi-scened glass panels from the Abbey of Mariawald. Considered to be one of the greatest achievements of the glass painters of the early sixteenth century, the panels reveal the full range of the art of this period, including exceptionally beautiful landscape depictions.

A separate section of the exhibition will explain how both paintings and stained glass were created in this period: often using similar pigments but differing techniques, stained glass more closely approached the painter’s art, becoming ever more painterly and sophisticated. 'Art of Light' will explore both differences and similarities in techniques and approach, but, above all, by highlighting the beauty and importance of glass as well as painting it will open eyes to the lost worlds of medieval and Renaissance Germany.