Image: Detail from Raphael, The Madonna and Child with Saint John the Baptist and Saint Nicholas of Bari ('The Ansidei Madonna'), 1505

When paintings can be examined safely in the conservation studio, minute samples of paint may be taken from the edges of pre-existing losses or other areas of damage. 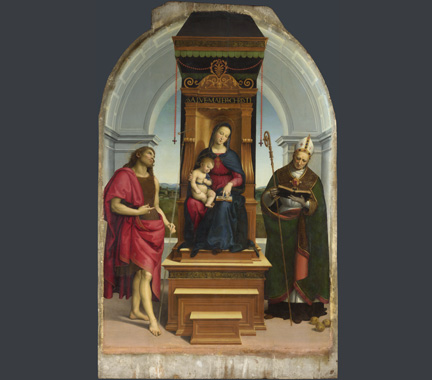 Raphael, The Madonna and Child with Saint John the Baptist and Saint Nicholas of Bari ('The Ansidei Madonna'), 1505

The binding medium for Raphael’s ‘Ansidei Madonna’ was revealed using an advanced technique called gas-chromatography linked to mass spectrometry (GC-MS). This showed that the picture was painted in a wide range of pigments, bound together using walnut oil.

Paint samples can be mounted in a block of resin, then ground and polished so that the sequence of layers can be viewed under the microscope. In this way the build up of the composition is revealed. The mounted sample is called a paint cross-section. At high magnification it becomes possible to study both the layer structure, which may include the preparatory layers, and the pigments used.

In the case of the Ansidei Madonna, there is a prepartion on the wood panel of a gesso ground with an oil-based priming on top. Raphael achieved his effects by applying oil paint over these preparatory layers. The deep, rich red of Saint John the Baptist’s robe, for example, is built up with several layers of semi-opaque colour completed with translucent glazes.

Raphael used a rich variety of gilding techniques for this altarpiece. On the upper surface we can see the powdered gold and powdered silver, which has been used for the pattern on the border of the mantle. 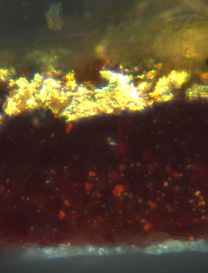 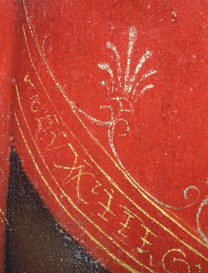 The powdered gold and silver in John the Baptist's mantle

Unmounted samples of the ultramarine from the Madonna’s robe

No expense was spared for this painting. The final layer of the Madonna’s blue drapery is painted as a glaze of the very expensive pigment, natural ultramarine. This is made from a semi-precious stone (lapis lazuli) which had to be imported from mines in Afghanistan.

Cross-sections can also reveal alterations to the composition (pentimenti). For example, the grey architecture and vaulting behind the Virgin’s throne was not planned by Raphael from the beginning. It was in fact painted over the skyline and landscape after painting had been started.

We know this because  a cross-sectional sample has shown that a layer of green paint of the landscape lies beneath the grey paint of the architecture. Analysis has shown that this grey colour contains a most unusual silvery pigment – a powdered heavy metal known as bismuth.