Image: Detail from Raphael, The Crucified Christ with the Virgin Mary, Saints and Angels ('The Mond Crucifixion'), about 1502-3 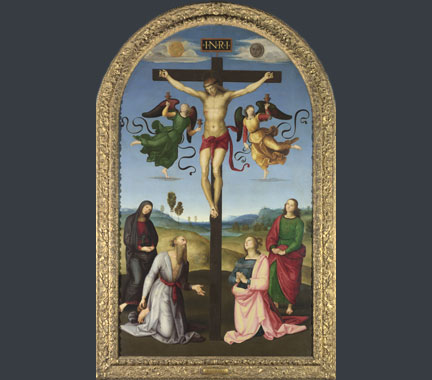 Raphael, The Crucified Christ with the Virgin Mary, Saints and Angels, about 1502-3

For a long time, frames - once emptied - were not considered worth preserving. Nowadays, frames are recognised as works of art in their own right – the aim is to give paintings a frame that works in harmony with the picture. The scarcity of period frames, and the fact that they may not fit, make this difficult to achieve.

Raphael’s Mond Crucifixion is named after its last owner, who bequeathed it to the National Gallery. It was commissioned by the wool merchant and banker Domenico Gavari for his burial chapel dedicated to Saint Jerome in the church of S. Domenico in Città di Castello. The altarpiece was set into the architecture of Gavari’s side chapel, so the sandstone frame still exists in its original setting.

According to the incised Latin inscription on the frame the work was commissioned in 1503: HOC . OPVS . FIERI . FECIT . DNICVS / THOME . DEGAVARIS . MDIII (‘Domenico di Tommaso Gavari had this work made 1503’). 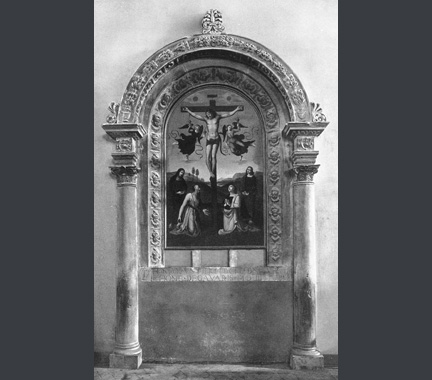 The surviving frame of 'The Mond Crucifixion' from the church of S. Domenico, Città di Castello

The altarpiece also included a predella, depicting episodes from the life of Saint Jerome. Two panels from this predella survive (now in Raleigh, North Carolina Museum of Art and Lisbon, Gulbenkian Museum).

Raphael’s Mond Crucifixion is now in a 19th-century frame, in a style which copies an Italian 17th-century frame. This frame has been adapted for the arched top of the altarpiece. 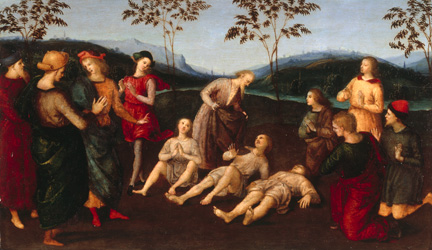 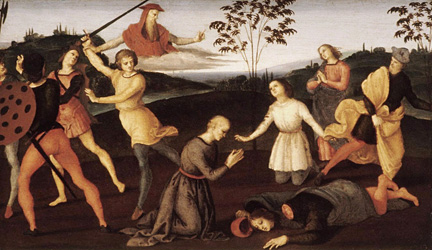