Image: Detail from Raphael, The Procession to Calvary, about 1504-5

Raphael’s Procession to Calvary was the once central scene of the predella below an altarpiece of the 'Virgin and Child with Saints'. The altarpiece was made for the Convent of S. Antonio in Perugia, which has now been largely destroyed. 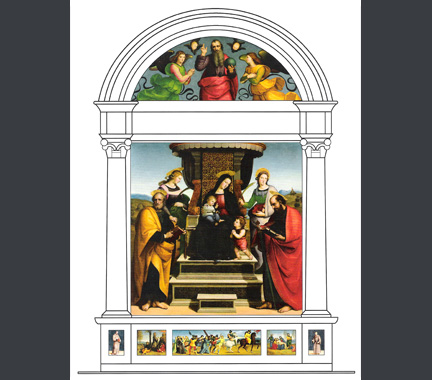 Reconstruction of the altarpiece showing all seven panels

Breaking up the altarpiece

The altarpiece remained intact at the convent until 1663. Having run into hard times, the nuns of S. Antonio sold the predella, consisting of five little pictures to an agent of Queen Christina of Sweden. The sale was motivated by the fact that the nuns owed 300 scudi to the butcher for meat already consumed, and 200 scudi for grain, wine and oil.

The sale had to be agreed by the bishop of Perugia who stipulated that a copy of the predella be substituted for the original. The copy, now in the Galleria dell’Umbria, Perugia, depicts the 'Agony in the Garden', the 'Procession to Calvary' and the 'Pietà' on a single plank.

Reconstuction of the predella from the 'Virgin and Child with Saints' altarpiece from the Convent of S. Antonio in Perugia

The central panel from the predella now owned by the National Gallery, Raphael's Procession to Calvary 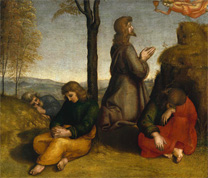 The scene from the centre left of the predella: Raphael, 'The Agony in the Garden', about 1504-5
© The Metropolitan Museum of Art, New York 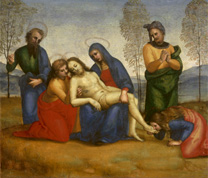 The scene from the centre right of the predella: Raphael, 'Pieta', about 1504-5
© Isabella Stewart Gardner Museum, Boston, Massachusetts 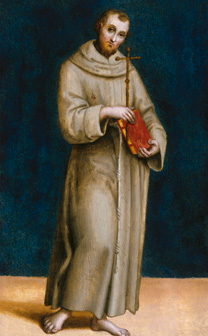 The outer left panel from the predella: Raphael, 'Saint Francis', about 1504-5
© By Permission of the Trustees of the Dulwich Picture Gallery, London 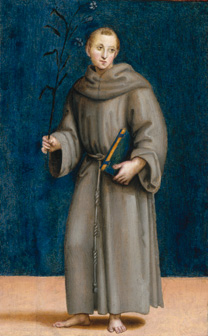 The outer right panel from the predella: Raphael, 'Saint Anthony of Padua', about 1504-5
© By Permission of the Trustees of the Dulwich Picture Gallery, London

Some years later, the nuns once again found themselves in financial difficulties. This time the bishop of Perugia approved the sale of the main panel, and the lunette. 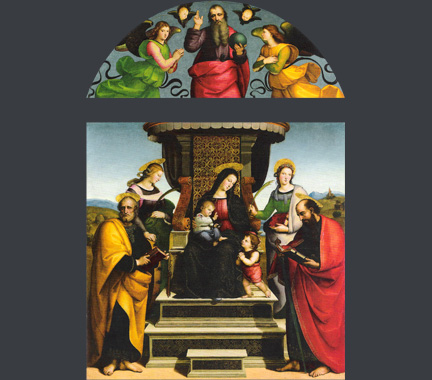 The main panel and the lunette: Raphael, 'The Madonna and Child Enthroned with Saints (The Colonna Altarpiece)', about 1504
© The Metropolitan Museum of Art, New York
Gift of J. Pierpont Morgan, 1916

Count Antonio Bigazzini purchased the main panel and the lunette in 1678 for 2,000 scudi. He furnished the nuns with a copy, which was stolen shortly after the convent was closed in 1810.

Bigazzini may have been acting as an agent for the next owners, the 'Colonna', one of the most noble families of Rome after whom the altarpiece is named. The painting remained in the Palazzo Colonna until the family’s paintings were sold in 1798.

In the same year the predella came on the market in London as part of the Orléans sale when the separate panels found different buyers.

Reconstruction of the altarpiece

An exhibition at the Metropolitan Museum in 2006 reunited the seven panels of Raphael’s Colonna Altarpiece for the first time since their dispersal in the 17th century.