Image: Detail from After Raphael, The Madonna and Child, probably before 1600

Raphael’s continuing fame is apparent through the large number of copies made of his paintings over the centuries. Although much importance was given to the creative process of artistic invention, copying other works and re-using successful models was common workshop practice in Renaissance painting.

Copies of works by Raphael

A number of copies of paintings by Raphael have survived in public and private collections. Many of them are fairly accurate reproductions, dating from the 16th to the 19th centuries. It is often difficult to determine whether a copy has been made from the original painting or by using another identical copy.

The National Gallery owns a copy of Raphael’s Virgin and Child (The Bridgewater Madonna). The original is in Edinburgh, (in the Duke of Sutherland’s collection, on loan to the National Gallery of Scotland). The composition of the copy is similar in size and in most colours – it also follows Raphael’s style closely. This makes it difficult to attribute the painting to a known artist. 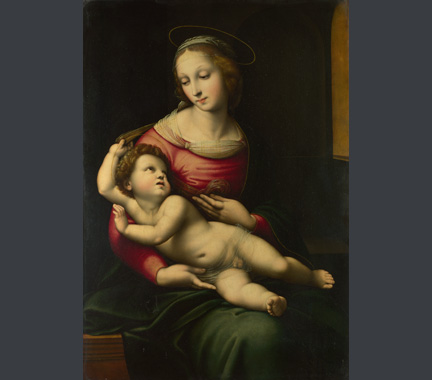 The National Gallery's copy of the Virgin and Child, probably before 1600

Although it is hard to determine the painting’s origin it possibly dates from the late 16th century. The copy is very precise except for the drapery which covers the Child’s nudity, which is clearly a later addition (probably added in the 19th century). 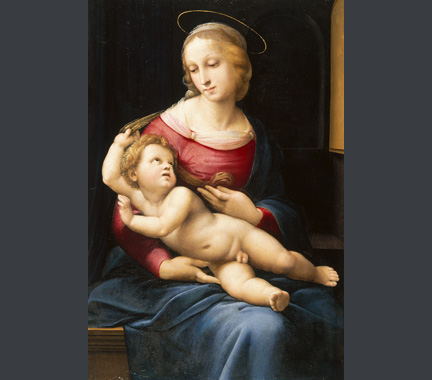 The original painting, without drapery concealing the Child's nudity
Raphael, 'The Virgin and Child ('The Bridgewater Madonna')', about 1507
Duke of Sutherland Collection, on loan to The National Gallery of Scotland, Edinburgh
© National Galleries of Scotland

Prints of works by Raphael

Famous compositions are also often reproduced in prints. The earliest known print of the 'Bridgewater Madonna' was made when the painting was in the collection of the Duke of Orléans in Paris. It was made by the famous engraver Nicolas de Larmessin for Antoine Crozat’s first volume of prints, which was published in 1729 and included some of the most beautiful paintings in France. 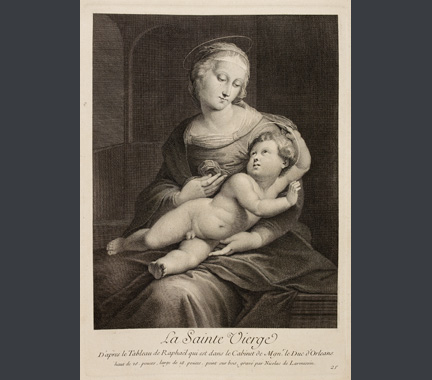 Unlike many great European painters who were also famous for their printmaking, Raphael made no prints himself. Instead, he collaborated with Marcantonio Raimondi, an Italian engraver known for being the first important printmaker who mainly copied the inventions of other artists. 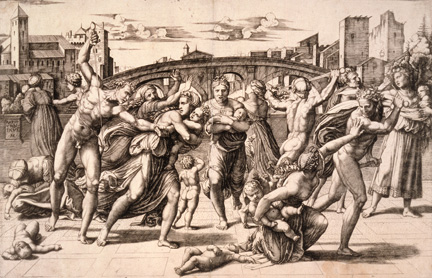 Raimondi's print after Raphael, ‘Massacre of the Innocents’, from c. 1511-12
© The British Museum, London

Some of Raimondi's engravings were copies of Raphael’s paintings, but Raphael also created designs purely to be turned into prints. Before photography became widespread in the 20th century, outside Italy Raphael’s art was known mainly through Raimondi’s reproductive prints. 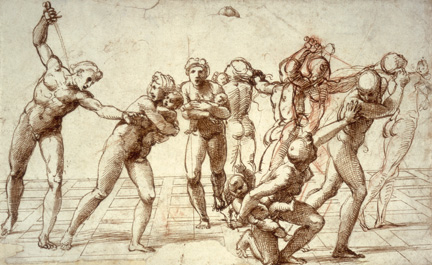 A preparatory drawing used by Raimondi for his final design
Raphael, 'Study for the Massacre of the Innocents', about 1510
© The British Museum, London
Raphael
1483 - 1520
Tag: Biography
Read more