Image: Detail from Raphael, The Madonna and Child ('The Mackintosh Madonna'), about 1509-11

The National Gallery’s ‘Virgin and Child’ by Raphael, known as the 'Madonna of the Tower' (named after the tower visible in the left background) or the 'Mackintosh Madonna' (after its last owners) was once part of the famous collection belonging to the Dukes of Orléans at the Palais Royal in Paris.

As early as 1729 the painting is described as being damaged (this description is found in the first volume of an illustrated catalogue of paintings in France with engravings by Antoine Crozat).  Jacques Couché’s album of 1786 says that this damage can be explained as a result of careless cleaning. However, there is another explanation.

When the painting is first mentioned in Louis-François Dubois de Saint Gelais’s description of the Orléans collection of 1727, it is listed as painted on wood. However, Couché’s later album describes the painting as being on canvas. Evidently, the painting had been transferred from panel to canvas between 1727 and 1786. 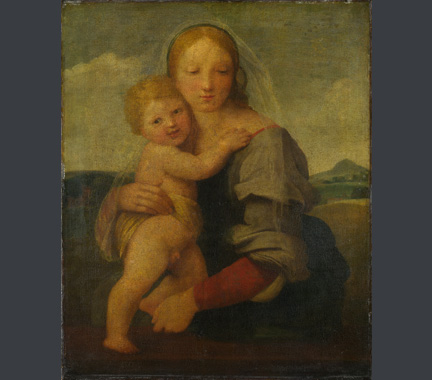 The procedure of transfer was first developed in Italy. It became popular in France during the 18th century. At the time, it was believed to prevent the deterioration of a painting caused by an unstable support.

Panels can indeed cause problems. Wood can expand and contract with changes in humidity and temperature, causing the panel to warp or even split and crack. It can also be weakened by woodworm attack. The transfer of a painting is, however, a difficult and risky operation.

We know that a Madonna by Raphael was transferred by the restorer Robert Picault in 1751. It is possible that painting he transferred was the National Gallery’s 'Mackintosh Madonna'. Picault used a highly dangerous technique to separate the paint from the panel. He kept his method ‘secret’ but it seems that he destroyed the ground layer (between the paint and the panel) through prolonged exposure to nitric acid vapours. This allowed him to display the intact original wooden support alongside the transferred painting.

Although the 'Mackintosh Madonna' has been described as being damaged since it was first recorded in the 18th century, its ruinous condition must also be due to the transfer from panel to canvas. Large areas of original paint are missing. The surviving paint is much abraded and covered with restoration and very discoloured varnish. A strip along the left edge, (which includes the tower from which it once took its name) seems to have been added in the 18th century. However, this probably replaces an original strip, lost due to damage. 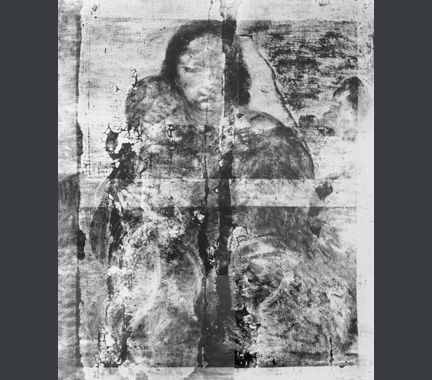 X-ray of Raphael, The Madonna and Child ('The Mackintosh Madonna') 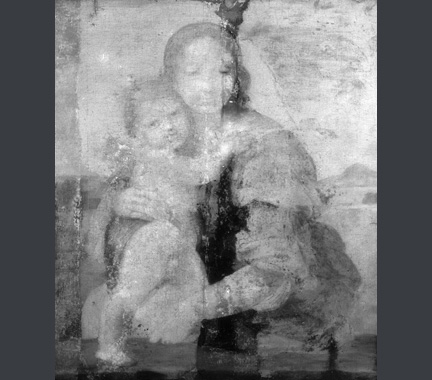