The impressive quality and haunting power of this painting make it difficult to accept that it could be the work of a completely unknown artist. Nonetheless, more than a century of diligent connoisseurship and sophisticated scientific investigation has failed to discover who might have painted this work. 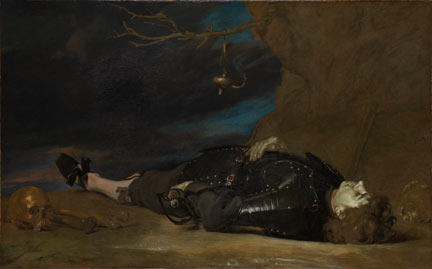 'The Velázquez is secured'

With these triumphant words, director Sir Charles Lock Eastlake reported the successful purchase of A Dead Soldier at the sale of the Pourtalès collection in Paris in April 1865. "I examined the picture well… & satisfied myself of the authenticity of every part", he stated.

The painting was already well known, and was very likely the inspiration for the dead toreador in Edouard Manet's ‘Incident at a Bullfight’, exhibited at the Paris Salon of 1864 (Manet subsequently cut his painting into several pieces; ‘The Dead Toreador’ is now in the National Gallery of Art, Washington, D.C.) Despite Eastlake’s enthusiasm, however, not everyone was as convinced of the attribution as he was.

Edouard Manet, ‘The Dead Toreador’, probably 1864
Image courtesy of the Board of Trustees, National Gallery of Art, Washington, D.C.

A sea of attributions

Early National Gallery catalogues variously present the painting as ‘by’, ‘ascribed to’ and ‘attributed to’ Velázquez – a sure sign of wavering opinion. Other scholars were more decisive in their views. In the first quarter of the 20th century alone, the attributions proposed for this enigmatic work ranged from Francisco de Zurbarán to the Bohemian painter Karel Škréta (1610–1674); it was even suggested that the painting might be a copy by Eugenio Lucas Villamil, a late 19th-century emulator of Francisco de Goya. Removal of some dark overpaint in 1945 revealed a possible monogram – the letter ‘A’ – on the rocks near the right edge of the canvas, but this proved of little help in determining who might have painted the work.

Eventually, most scholars came to feel that ‘A Dead Soldier’ was probably Italian and not Spanish. Its combination of Caravaggesque naturalism and poetic melancholy suggested to many that the picture might have been painted in Naples. Still, one can sense the frustration of curator Michael Levey when, in his 1971 catalogue of the Gallery’s 17th-century Italian paintings, he was unable to offer a more precise attribution: "If the picture is Italian, it might well be a Neapolitan work… [however] the handling does not seem analogous to that of any known Neapolitan painter…" Although Levey emphasised that the lack of a satisfactory attribution did not mean the painting was not an authentic work of the 17th century, he left open the possibility that it might be a later work.

‘A Dead Soldier’ was cleaned in 1946 (revealing the water and bubbles in the foreground), but not until 1991 was it the focus of more extensive scientific analysis. It was hoped that the analysis would provide some clues as to the painting’s date and geographic origin. The single-layer, brown ground layer was examined using EDX and found to contain a large amount of silica, along with iron, potassium and calcium. This elemental mixture is entirely characteristic of the grounds of 17th-century paintings from Naples and Rome. Analysis also identified indigo (in the sky) and lead-tin yellow (from a rivet on the armour); these, too, are consistent with 17th-century practice. No anomalous pigments were found to suggest a date later than the 17th century.

Back to the beginning?

In 2008, an attribution of the painting to Aniello Falcone (1600–1665), a Neapolitan painter primarily of battle scenes, was proposed. While Falcone’s depictions of fallen soldiers are not too distant from the subject of this haunting picture, he painted no figures on this grand scale. More importantly, when the monogram (‘A’ for Aniello?) was examined closely during cleaning of the painting in 2002, it was found to have been painted over a network of older cracks in the underlying paint layers, and was therefore probably not original. Powerful and enigmatic, ‘A Dead Soldier’ may carry the secrets of its creation to the grave.