Image: Detail from Lucas Cranach the Elder, ‘Portrait of Johann Friedrich the Magnanimous’, 1509

Johann the Steadfast is shown against a green background. He wears a black hat decorated with twisted ropes of small gold and seed pearl beads which pass around the brim of the front of his hat (fig. 1), which is also decorated with two small gold tags or aglets, and over the brim, where it appears to be attached with a bow, or where the ends of the ropes protrude. To our left the ear flap is pinned up with a large golden brooch in the form of a cross (fig. 2). It is studded with precious stones, including rubies at either end of the horizontal bars of the cross, and there are pearls in the corners of the arms of the cross. Part of a gold chain is visible to the right of the brooch, and two golden tags or aglets protrude at the left-hand side. A curling black feather with pale yellow circular markings is attached to the top of his cap behind the earflap. His black coat is patterned with dark grey, evidently indicating a damask weave. At the front of his coat are three tiers of slashes fastened by knots fashioned from ropes of gold and seed pearl beads similar to those trimming his hat (fig. 3). The high collar of his white shirt is visible through the coat: it is embroidered with a trellis pattern, in black and gold thread or beads, and trimmed with tiny pearl beads. The collar is fastened with another knot of gold beads. On the thumb of his right hand he wears two rings, one formed from small gold beads and the other a gold ring with a large blue stone. His hair and beard are dark brown and his eyes are also dark brown. 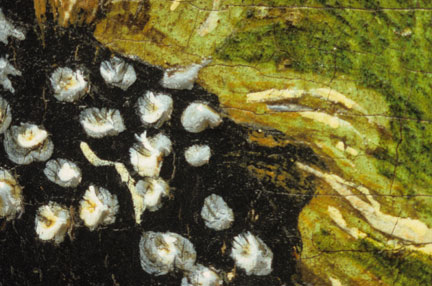 fig. 1 Detail of NG6538 showing the ‘tuft’ and pearls on the hat of Johann the Steadfast 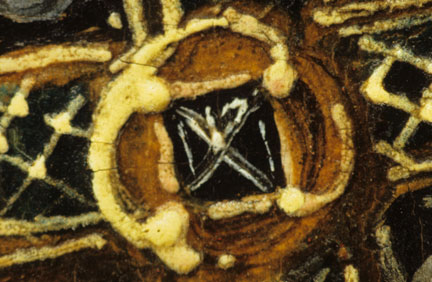 fig. 2 Detail of NG6538 showing the detail of the jewel on the hat of Johann the Steadfast 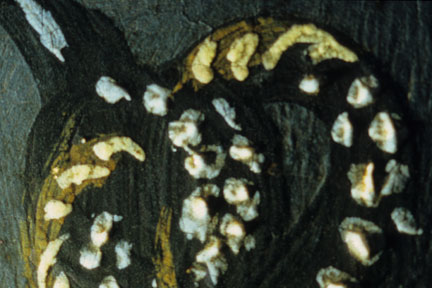 fig. 3 Detail of NG6538 taken in raking light showing the pearl tassel on the tunic of Johann the Steadfast

Johann Friedrich the Magnanimous is placed against a black background. He wears a green doublet with bands of red and white in a tartan pattern, slashed to reveal a red lining; his sleeves are bound with rows of red, white and blue ribbons. The edge of a gold-trimmed shirt is just visible at his neck. Over his shoulders he wears a large gold chain of twisted links. His hat is green and is adorned with three jewelled ornaments. Two of these resemble bows of gold, their surface engraved with a diaper pattern; the left-hand one, the only one properly visible, has a cluster of pearls at the centre. The third ornament, on our right, appears to be a gold and white enamel with a pendant pearl (fig. 4). The hat is surmounted by voluminous multicoloured ostrich plumes, white with green, pink and blue; such dyed ostrich feathers were fashionable at courts in northern Europe in the sixteenth century.10 Johann Friedrich holds a sword with a pommel of golden metal. His hair is fair and his eyes are light brown. 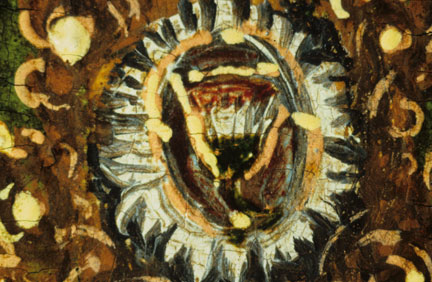 fig. 4 Detail of NG6539 showing the detail of the jewel on the hat of Johann Friedrich the Magnanimous

The two sitters are identified by the coats of arms on the back of the right-hand portrait. They are head erased Sables, langued Gules, horned Argent, crowned Or. Two Argent a griffin rampant left, armed Or. Three Argent an eagle Gules armed and beaked Or, langued Gules. The wings charged with a trefoil Or. They confirm the resemblance of the sitter in the left-hand panel to portraits of Johann the Steadfast (1468–1532) Elector of Saxony, who ruled jointly with his brother Frederick the Wise (1463–1525). The electors employed Cranach as their court artist from 1505. The right-hand panel must therefore depict his son, Johann Friedrich the Magnanimous (1503–1554), whose mother Sophie von Mecklenburg died at his birth in 1503. There are no other certain portraits of Johann Friedrich as a boy, although a few images survive which are likely to represent him (see further below). There are a number of portraits of him by Cranach as a portly dark-haired adult (for example, his marriage portrait at Weimar dated 1526, or the slightly later portraits of him as a ruler, such as in the triptych at Hamburg) bearing little resemblance to the boy in this portrait, though there is no reason to doubt the identification. Johann Friedrich would have been aged about six when this portrait was made. His father was aged about thirty-eight. The humanist Konrad Mutian (1470–1526) referred to the young boy at this time as ‘the only hope of his country’ (‘unica spes patriae’).11

Johann the Steadfast shared the tastes of his brother Frederick for both the traditional courtly pastimes of hunting and tournaments, and for art and learning. Together the electors established a large and famous collection of relics, which were recorded in woodcuts by their court artist Cranach. However, they became early enthusiasts for the beliefs of Luther, who nailed his theses to the door of their castle church at Wittenberg and they protected him from his persecutors. In 1527 Johann established a Lutheran church and made himself the local bishop. After the death of Frederick in 1525 Johann ruled alone. In 1513 Johann married his second wife, Margaret of Anhalt (1494–1521), with whom he had four children and resided in Weimar. Although he espoused the Protestant cause at the Diet of Speyer in 1529, and later entered into the Schmalkaldic alliance with other Protestant princes, he did not wish to take arms against the Habsburgs or create a lasting rift in Christendom.12

His son Johann Friedrich the Magnanimous married Sibylla of Cleves in 1527; they had four sons. He received a humanist as well as a courtly education, and his theological interests were awoken early: he became a strong supporter of Luther and took forward the establishment of the Lutheran church in his territory, sequestering monasteries in 1534. He led the Schmalkaldic league of Protestant princes to war against the Emperor Charles V, and in 1547 was captured at the battle of Mühlberg and sentenced to death. His sentence was commuted to lifelong imprisonment and he was kept as a prisoner in Augsburg until 1552, when he was released to live in Weimar until his death two years later.13

The Creation and Viewing of the Diptych 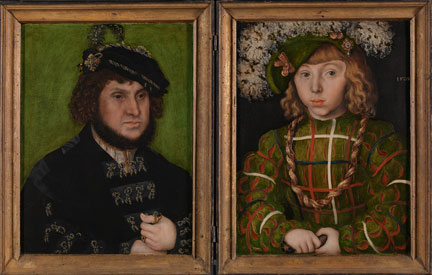 The two portraits are clearly closely related in their colour scheme, the green background of the portrait of the father balancing the green clothing of the son, and similarly in the use of black, corresponding to the heraldic principle of ‘an exchange of colours’.14 Yet the poses of the two sitters are quite different and they are placed at differing heights, the son a little higher and evidently slightly closer to the viewer than the father; the portraits also seem conceived at slightly differing scales. It might at first glance seem possible that Cranach joined together two pre-existing portraits or painted a second portrait to go with an originally independent work, thereby making up a diptych. Certainly, it is probable that the likenesses had separate origins, independent of this commission; this might account for some of the disparity in the compositional relationship, despite the clear attempt to relate the two portraits through the repetition of the colours black and green, as well as for the greater sense of immediacy and spontaneity in the portrait of the young Johann Friedrich.

A number of portraits of Johann the Steadfast survive: although there appear to be no other surviving individual portraits from this period his portrait is included in altarpieces by Cranach, along with that of his brother Frederick the Wise, and in an engraving by Cranach of 1510 also showing both brothers.15 The image seen here (NG 6538) is closest to that on the altarpiece of the Holy Kindred in Frankfurt (fig. 5). A tracing that was reduced by 50 per cent and placed on the Frankfurt picture corresponded exactly in outline, although details such as the right eye and the placing of the hat have been changed.16 This suggests that a workshop pattern was in use, although as no underdrawing is visible using infrared reflectography, there is no evidence which might have helped to confirm this, such as indications that the image has been transferred through pouncing or tracing.17 By contrast, there is no indication of any repetition of portraits of Johann Friedrich following this pattern. Indeed, this would be unlikely in the case of a small child whose appearance was subject to rapid change. Other images by Cranach may show Johann Friedrich as a small boy: a woodcut by Cranach (fig. 6) (and his depiction of a small boy handing roses to St Dorothy in the wing of the St Catherine altarpiece (the reverse of NG6511), as well as the small boy in the centre panel of the Holy Kinship altarpiece at Frankfurt.18 Neither of these, however, has any relationship with the image of him seen here.

fig. 5 Lucas Cranach the Elder, Right-hand shutter of the altarpiece of the Holy Kindred showing a portrait of Elector Johann the Steadfast, 1509, Städelsches Kunstinstitut, Frankfurt am Main © Städel Museum – Artothek 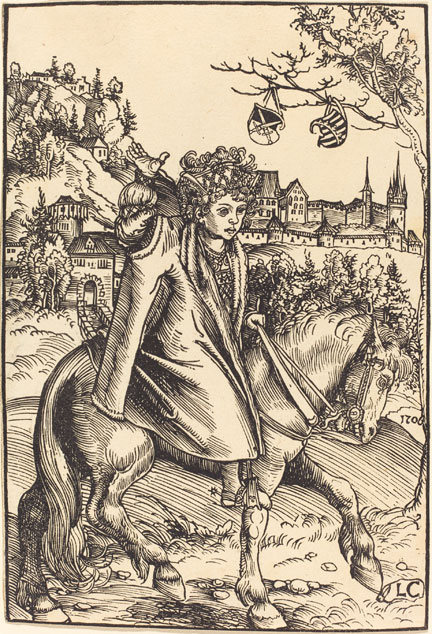 Portrait diptychs more commonly show man and wife, so the conjunction of widowed father and motherless son here is unusual. The arrangement of father on the left and son on the right is analogous to portrait pairs of husband and wife, in which it is usual for the husband to be shown left: the left-hand side – in real terms the right – was considered in heraldry to be the more important.19 In other portrait pairs by Cranach the husband is placed in three quarter face and the wife is placed more frontally: for example, the portrait dated 1503 of the so-called Stephen Reuss in Nuremberg and his wife in Berlin, although here the latter’s head is turned to the left and she looks towards her husband. However, in portrait pairs of man and wife Cranach generally shows the wife as a slightly smaller figure, with more space above, whereas here the reverse is the case. Here the disparity between the two compositions – and perhaps the particular exuberance evident in the painting of the portrait of the boy – can be explained by the use of a standard pattern for the portrait of Johann the Steadfast, whereas the portrait of Johann Friedrich must have been painted from life, or more probably from a drawing made in his presence.20 This was the first of a number of diptychs and triptychs of the electors of Saxony produced by Cranach much later in his career that were sent to other European rulers; this, too, may have been a diplomatic gift to the rulers of Baden (see Provenance).21

When the diptych was closed it would have been placed with the coats of arms of Johann the Steadfast on the reverse of the right-hand side uppermost (fig. 7); this side, with the portrait of his son on the reverse, would then have been opened to reveal his own portrait; a similar construction is seen in some early Netherlandish diptychs which show a donor on the right-hand shutter with the Virgin Mary on the left.22 If the diptych is stood upright and opened at an angle, as was probably intended, the gaze of the child meets the viewer, which is not the case when it is placed parallel to a flat surface.23 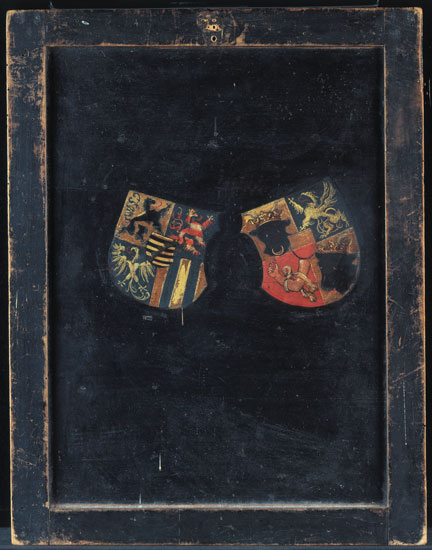 15. For example, the altarpiece of the Holy Kindred at Dessau (Friedländer and Rosenberg 1978, no. 20), that of the Holy Kinship at Frankfurt (no. 18) as well as the St Katherine altarpiece in Dresden (no. 14); see also the entry for NG 6511. [http://www.nationalgallery.org.uk/paintings/lucas-cranach-the-elder-saints-genevieve-and-apollonia]

16. I am grateful to Dr Jochen Sander for his help in this comparative exercise.

17. There is a rather free underdrawing in the case of the Frankfurt portrait; I am grateful to Gunnar Heydenreich for this observation.

20. Compare the portrait drawings of young boys in chalk and watercolour in the Louvre of about the same period: Hamburg 2003, nos 9 and 10.