Cranach was born at Kronach in Upper Franconia in 1472.1 From about 1502–4 he worked in Vienna, where he painted portraits of subjects associated with the university. On 14 April 1505 he first received payment in the service of the Elector Frederick of Saxony at Wittenberg.2 He was granted a patent to bear arms on 6 January 1508.3 In 1509 he travelled to the Low Countries.4 Cranach spent the rest of his career working in Wittenberg for the successive electors of Saxony: Frederick the Wise, succeeded by his brother Johann the Steadfast in 1525, and the latter’s son Johann Friedrich the Magnanimous, who became elector in 1532. In 1519 Cranach was elected a town councillor of Wittenberg and in 1537 and 1540 he was burgomaster. In 1550 he joined Elector Johann Friedrich at Augsburg, where the elector was the prisoner of Charles V.5 In 1552 Cranach followed him to Weimar where he died on 16 October 1553.6 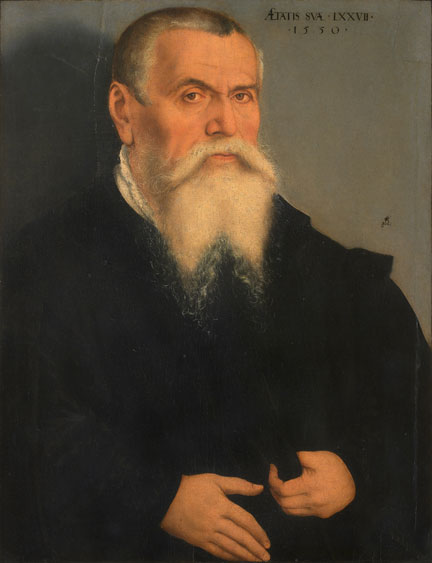 Cranach ran a large workshop at Wittenberg, in which his sons Hans (died 1537) and Lucas the Younger (1515–1586) undoubtedly played a part, as well as many others.7 The range of his work included altarpieces, portraits, and mythological subjects as well as wall paintings and paintings on canvas, now lost, made for the castles of the electors.8 Many of his works include one of the forms of the winged serpent derived from his coat of arms, but inclusion cannot be understood as a sign of Cranach’s personal intervention in a painting, nor can its omission be taken in the reverse sense.9 Cranach’s workshop was clearly organised to supply huge demand in the most efficient manner (for example the sixty repetitions of the small portrait diptych of the electors, for which he received payment in 1533).10 Most of his work executed between 1520 and 1535, for example, used six standard sizes of panel.11 It is a notable characteristic of Cranach’s production, however, that subjects were rarely repeated exactly and the quality of different versions was often equally high.