Image: Detail from Jean-Baptiste-Camille Corot, ‘The Leaning Tree Trunk’, about 1860-65

The original canvas is fairly fine. It has been relined, but the stretcher is probably original. The original tacking holes are intact at the sides and bottom, but mostly missing at the top. The number 2176 (not identified) is written in blue crayon on the stretcher. 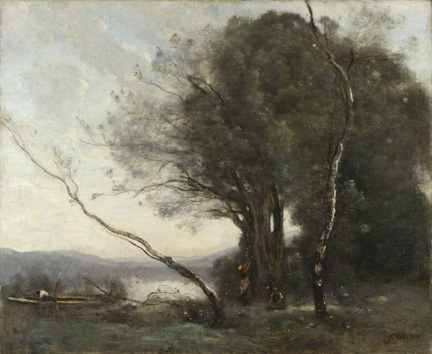 This painting is representative of a change in style in Corot’s work which occurred in the 1860s and 1870s. During this period colour became less important and he increasingly favoured muted tones. His brushwork also changed; he often painted quite thinly, leaving parts of the ébauche (initial sketch), or even the ground visible.

He would work the picture surface with innumerable small touches of paint, creating a shimmering effect. This can be seen here in the branches to the left of the main clump of trees, where the foliage is painted in touches of grey paint. Corot’s usual practice throughout his life was to paint the sky last, over which he added extra branches and foliage to trees already painted. This is the case here with those branches which stretch out to the far left of the picture.

The ground is composed of lead white, over which a brown translucent undercolour has been painted which can be seen through the top paint1. Corot has used cobalt blue in the sky and in the greyish mauve of the middle distance. The mid-green foreground is created from blue and yellow, made up of a transparent yellow (possibly chrome) and a fine blue (possibly Prussian blue) mixture with white, red and black in small amounts.

Much has been written, from Robaut onwards, on how Corot preferred to mix his greens, rather than use ready-made ones but in actual fact he used both, as is evidenced by other paintings in the collection2. The very bright orange streaks in the boat and on the woman’s cap have been identified as cadmium orange, a pigment which came into use in the latter half of the 19th century. It has also been identified in Corot’s Les Evaux, near Château Thierry, dated by Robaut to 1855 to 1865 (R1292, private collection)3.

Analysis of the paint medium has shown heat-bodied walnut oil to be the binding medium. Heat-bodying the oil would have ensured more rapid drying, a smooth glossy surface, and few visible brushstrokes. There are also traces of pine resin and dammar resin in a sample of green taken from the right edge of the picture. Resins, which would have been incorporated in the form of varnish, were added to improve the working qualities and gloss of the paint and to give greater saturation of colour.

It is in generally good condition apart from some wearing in the dark areas and a small vertical damage in the sky above the left horizon.