Image: Detail from Jean-Baptiste-Camille Corot, ‘Monsieur Pivoton on Horseback’, about 1853 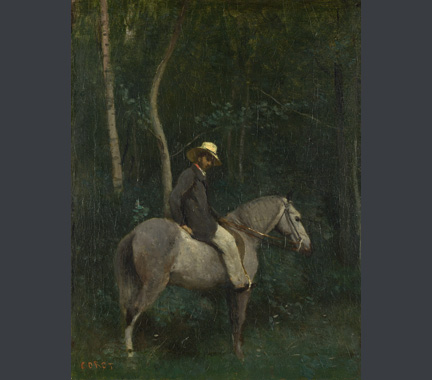 The stretcher is modern apart from the central bar with the ‘Vente Corot’ seal, which has been reclaimed from the original stretcher. There are pin holes at the top right and left corners and the canvas has been cut down at the right. The original canvas was stamped ‘Détrimont’ but due to the lining this stamp is no longer visible and the exact address is not readable in the existing photograph. Alexis-Eugène Détrimont (born 1825) was a picture dealer who also dealt in canvases. He started a small framing business in the rue Notre-Dame-des-Champs in Paris before setting up in the rue Lafitte. From 1865 to 1870 he was operating at 33 rue Lafitte, and in 1871 he moved to 27.1 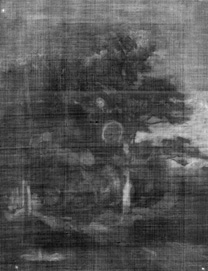 Technical analysis has shown that Monsieur Pivot is painted on top of another picture. An X-ray photograph (fig. 2) of the painting shows a more or less completed landscape underneath the present painting, with trees to the left, through which sunlight filters, giving way to a more open landscape on the right, with sky. A path leads under the tree from left to right, and to the right of centre in the X-ray there is a vertical light form, which is possibly a pillar or post.

Almost nothing of the figure of M. Pivot shows in the X-ray, despite the fact that lead-white has been identified in his trousers and is also likely to be present in the grey of the horse and the yellow of his hat. Paint runs over the edge of the stretcher: at the bottom and top edges there are just a few strokes, but at the right the paint goes right up to the edge of the turned-over canvas, suggesting that the canvas was cut down at some point.

At the top an area of pale blue paint is visible on the overlap, the same colour which is visible under the thin dark green paint at top left of the picture; this is the blue of the sky in the original composition (fig 3). A very light brown also associated with the first landscape is visible under the sketchy grey paint of the trouser leg (fig. 4).

fig. 3, Detail from Jean-Baptiste-Camille Corot, 'Monsieur Pivot on Horseback', about 1853

Examination of paint cross-sections reveals the multi-layered structure that could be expected from one picture painted on top of another. The ground is cream, consisting of lead white with a small amount of opaque yellow and a trace of calcium, probably from an extender, calcium carbonate.

fig. 4, Detail from Jean-Baptiste-Camille Corot, 'Monsieur Pivot on Horseback', about 1853

Samples taken from various points, such as the dark green foreground,  the foreground in the lower right corner, the top edge, and a touch of foliage on the lower right-hand edge, reveal a number of layers of paint, as many as four above the initial layer of the first landscape in the sample taken at lower right.

Three of the samples, but not that from the top edge, contain a varnish or medium layer between the paint layers, which represents a touching-in layer painted by Corot before he started on the portrait of Pivot. He would only have painted this layer if the landscape was touch-dry, which suggests that he had started it a couple of days earlier, and brought it out for a second campaign of work.

It is not unlikely, taking into account his practice of having on the go at any one time a selection of canvases in various stages of completion, that he had this second canvas with him, which he decided to use rather than the canvas he had on the easel when Monsieur Pivot rode by.

Pigment analysis has shown that here Corot was mixing his greens (as indeed he did in The Leaning Tree Trunk). Yellow and brown earths, Prussian blue and cobalt blue have all been identified. Medium analysis has identified the use of heat-bodied walnut oil and the minor addition of pine resin. Resins were probably added by Corot himself to alter handling properties and perhaps make the paint more glaze-like without actually rendering it transparent.

NG 3816 was cleaned, re-stretched and oil-varnished in 1919 by a former owner, Percyval Tudor-Hart,3  who notes that at that time the canvas had been torn by the tacks in several places. It has been wax-lined since entering the National Gallery collection and although the exact date is not known this must have been done after April 1962 as there are two photographs of the back of the original canvas in the painting’s history dossier, both dated ‘27.4.1962’. The paint is in general in very good condition, but the craquelure appears to have been slightly softened and flattened by the lining process. The outer edges are abraded all round.