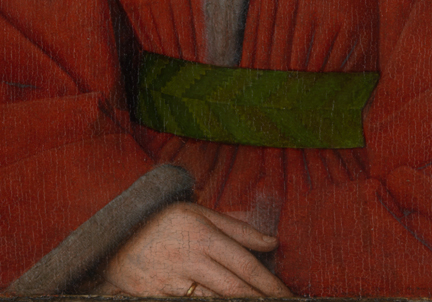 Detail from Jan van Eyck, 'Margaret, the Artist's Wife', 1439, after cleaning and restoration

Margaret is expensively dressed in a red wool gown, lined with grey fur, probably squirrel. The rich red colour, beautifully preserved, is built up with several layers of paint.

Over the white chalk ground is a thin layer of the opaque red pigment, vermilion, bound in a medium of heat-bodied linseed oil (identified by GC-MS). This seems to have been a flat, unmodelled layer, brushed in broadly. The sweeping brush marks are clearly visible in the X-radiograph, especially in the area of Margaret's hands, which were added over the red underpaint. 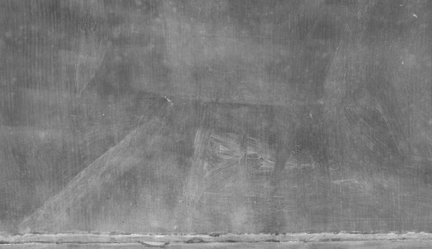 In places, the red underpaint encroached onto the mouldings of the frame (now visible in small areas of damage).

'Margaret, the Artist's Wife', lower part of a paint cross-section taken from the red dress at the lower edge. A single layer of vermilion underpaint has been applied to the white chalk ground 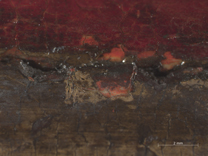 'Margaret, the Artist's Wife', photomicrograph of the lower edge, showing the red underpaint extending onto the frame moulding. A photomicrograph is a photograph taken at high magnification through a microscope

Over this red underlayer, the folds of the dress were modelled with layers of red lake glaze. Unfortunately, the tiny paint sample, taken from the damaged lower edge, split at the interface between the underlayer and the subsequent paint layers.

'Margaret, the Artist's Wife', upper part of a paint cross-section taken from the red dress at the lower edge. Photographed in ultraviolet light

'Margaret, the Artist's Wife', upper part of a paint cross-section taken from the red dress at the lower edge

The lowest layer of the upper cross-section is in fact a grey paint consisting of bone black and lead white. Since the sample point is at the conjunction between image and frame this is probably an overlap with the greyish marbled frame. It is confirmation that the frame decoration was applied concurrently with the painting of the portrait.

Three layers of red glaze can be seen in the cross-section, most clearly when viewed in ultraviolet light. There may be a small amount of lead white in the first glaze layer which fluoresces more than the other red layers. The strongest fluorescence is from a layer of varnish between the final and penultimate glazes, perhaps applied to saturate the colours before the final touches. Some of this varnish may survive as a surface coating elsewhere on the paint surface.

Read more about the cleaning of the painting

Analysis by HPLC reveals that the paint of the glazes contains two separate dyestuffs. The principal component is kermes from the scale insect, Kermes vermilio Planchon, the most expensive red dyestuff. Some madder, the dyestuff from the plant Rubia tinctorum L., is also present. Its distinctive fluorescence in ultraviolet can be seen in particles in the cross-section.

Although GC-MS analysis confirmed that the binding medium of the glaze layers is the same heat-bodied linseed oil as in the underpaint, some protein was detected by FTIR. This indicates that one of the dyestuffs used to make the red lake pigment, most probably the madder, was sourced from shearings of a dyed red woollen textile.1 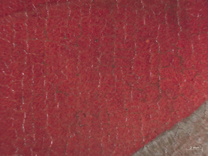 'Margaret, the Artist's Wife', photomicrograph of the right sleeve showing the blotting of the red lake glaze layers 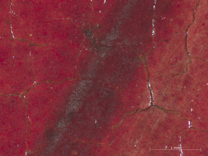 'Margaret, the Artist's Wife', photomicrograph of the red dress showing blanched ultramarine in the deepest shadows

To darken the shadows, Van Eyck added a little bone black and also some natural ultramarine. The deepest folds were reinforced with final touches of ultramarine.

Unfortunately the rich purple blue pigment is now degraded and blanched, a common phenomenon in paintings by Van Eyck (including Portrait of a Man (Self Portrait?), 1433) and so the original effect is lost. Under magnification it can be seen that Van Eyck blotted the sticky paint with his fingers or the palm of his hand in order to ensure even application of the glazes.2

Embedded in the paint of the fur where it meets the edge of the veil on the right side of her neck is an S-shaped red fibre. Is this a fibre from Margaret’s red wool dress, shed as she leant over to inspect her husband’s portrayal of her in all her finery? 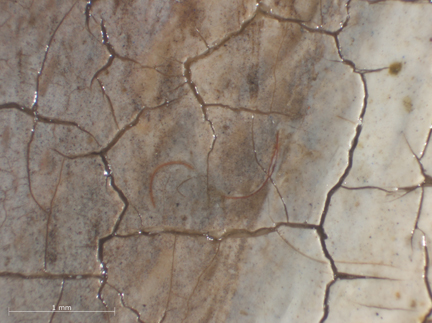 'Margaret, the Artist's Wife', photomicrograph of the fur lining