See below for a list of paintings in this location

Discovered in a private collection in 1982, Friedrich’s moody Winter Landscape was acquired by the National Gallery five years later. The painting appeared identical in nearly every respect to a version that had been in the Museum für Kunst und Kulturgeschichte, Dortmund since 1940. Yet only one version of the composition was recorded in 19th-century documents, so which painting was the original? 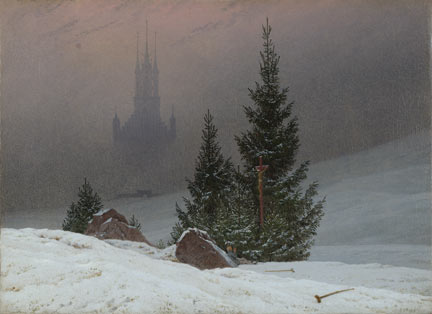 Although the two paintings appear at first glance to be identical, there are minute details in the London painting that do not appear in the Dortmund picture. The most noticeable are the gateway in front of the church and the blades of grass poking through the melting snow in the foreground. 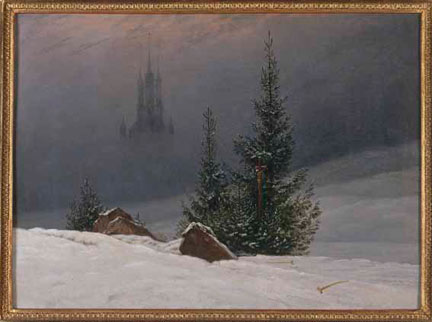 The distant church is rendered with exceptional clarity and detail in the London painting, comparable to similar structures in other works by Friedrich. The same feature in the Dortmund version is little more than a hazy silhouette, with no discernable architectural features. While the Dortmund painting is rendered with a broad, spontaneous touch, the precise, controlled handling of the Gallery’s work in fact relates more closely to Friedrich’s early style of painting. 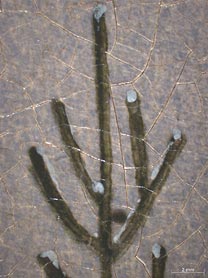 Friedrich began his career as a draughtsman, and when he turned to oil painting in 1807 he simply adapted his usual methods to the new medium. He applied the oil paint in thin, transparent washes over a delicate underdrawing, and many of the works he produced resemble coloured drawings more than paintings. He used a range of marks and patterns, such as short, hatched strokes, stippling (paint applied in tiny points or dots) and a selective use of thickly textured paint, or impasto, to convey the surfaces and forms of nature.

Friedrich took similar pains with the choice of pigments he used in ‘Winter Landscape’. Much of the scene is painted using just a few pigments – lead white, red earth and different grades of smalt – suggesting that a subtle gradation of tones, rather than colouristic variety, was a priority in creating this evocative scene.

The use of smalt is particularly interesting. Although synthetic blue pigments such as cobalt and Prussian blue were popular and readily available, Friedrich probably chose the more traditional smalt for its translucent quality. He applied the paint in delicate stippled strokes that scatter the light, recreating the dissolving textures of a vaporous winter landscape. 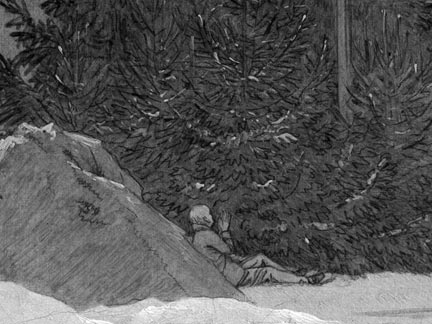 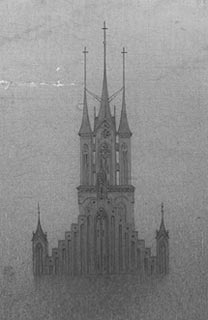 Recent improvements in infrared imaging have allowed a better understanding of the underdrawing of ‘Winter Landscape’. A slightly freer preliminary sketch – which appears paler in the infrared reflectogram – was reinforced with a stronger line marking the final placement of details. Both were executed in a liquid medium, probably with a brush. The basic structure of the church was marked out in the underdrawing with thin ruled lines. The church was painted in grey with details crisply drawn in black, then ‘veiled’ by the misty colours of the sky paint.

Although extensive underdrawing is a characteristic feature of Friedrich’s paintings, none is visible in an infrared photograph of the Dortmund painting. This distinctly separates that work from other paintings by Friedrich that have been studied by infrared imaging. The Dortmund ‘Winter Landscape’ is probably a replica by Friedrich himself or possibly by a pupil or imitator; its fidelity to the original suggests that it may even have been made while the National Gallery painting was still in Friedrich’s studio in Dresden.