Scientific examination of The Madonna with the Iris was able to clarify, to some degree, the complex genesis of this work. Careful study of the infrared reflectogram revealed many changes made at different stages in the working process, and suggested that more than one hand might have been involved in the painting’s execution. Analysis of paint cross-sections showed that some finishing touches were added after varnish had been applied to the otherwise completed painting. 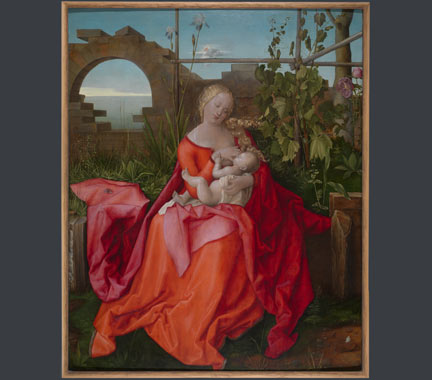 Workshop of Albrecht Dürer, The Virgin and Child ('The Madonna with the Iris'), about 1500–10 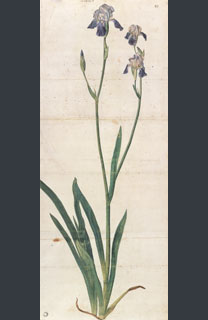 In 1945, National Gallery trustees approved the proposed purchase of ‘The Madonna with the Iris’. However, the painting’s problematic attribution engendered caution, and minutes of the Board Meeting for 3 May 1945 record:
'... the Board must not purchase it as an authentic Dürer’. Although the painting entered the collection as by Dürer, three years later the label was changed to ‘attributed to Dürer’.

In 1959 curator Michael Levey questioned the painting’s authorship more seriously. He felt that the painting, one of three known versions of the composition and the only one to bear a monogram and date, was the work of an imitator, possibly made during Dürer’s lifetime or a little later. Declaring the picture to be ‘almost suspiciously full of Dürer motifs’, Levey was troubled by the fact that it combined elements drawn from a number of actual paintings, drawings and prints by Dürer, all from different dates. The iris, for example, is based on a well-known drawing by Dürer that is now in Bremen.

In 1996 a thorough investigation of the painting was undertaken to investigate some of its more puzzling aspects. Infrared reflectography revealed that the Virgin and Child were carefully and precisely underdrawn, using a black pigment in a liquid medium applied with a brush (underdrawing in the background is less detailed). The infrared reflectogram also indicated the work was composed in sequential phases. For example, the iris was freely underdrawn, but then altered in the final painting. 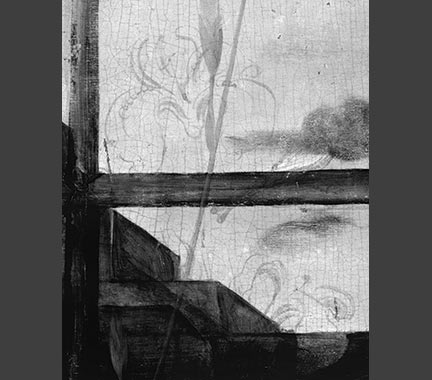 Some elements included in the initial drawing, such as a rose to the right of the Virgin’s head, were omitted from the final work, while other features were added at a later stage. In the course of painting, the wall behind the Virgin was redrawn and extended to include the arch at left.

Still other elements, such as the plants and grasses at left, were not underdrawn at all, but were added during the painting process. The differing approaches to figure and setting evident in the reflectogram suggested that more than one painter may have been involved in the production of the picture.

The monogram and date (1508), located to the left of the Virgin’s head, were also investigated. The monogram is painted over the remains of older overpaint that contains a type of varnish (Manila copal) not in use before the mid-18th century; thus the monogram cannot be contemporary with the rest of the painting.

The paint of the date, however, is earlier, as the pigments employed include lead-tin yellow, which fell out of use during the first quarter of the 18th century. A cross-section of a paint sample taken from this area showed that the date was painted over a layer of varnish. 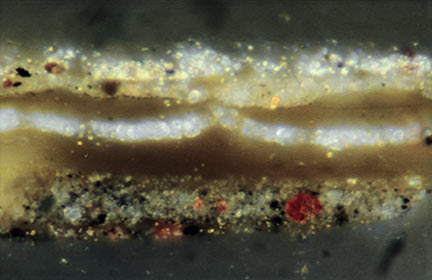 Cross-section of a sample from the figure ‘8’ of the date. From bottom up, the layers are: brown paint of the wall, the early varnish layer, the paint of the figure ‘8’ containing lead white and lead-tin yellow, then further varnish and overpaint layers

The varnish was analysed using FTIR and GC-MS and found to contain sandarac resin in a formulation similar to those described in 16th-century artists’ manuals. The same varnish was found between layers of paint in other areas of the painting, indicating that the upper layers had been painted after the varnish was applied – though probably fairly soon after the painting was completed. These include the Virgin’s veil, the butterfly on her cloak and some of the red lake glazes on her drapery.

It seems plausible that ‘The Madonna with the Iris’ was painted by one or more artists in Dürer’s workshop who took inspiration from drawings, prints and paintings by Dürer himself. The painting was probably varnished a few years after completion, and then some final touches – including the date – were added. The monogram was added at a later date in an attempt to transform a legitimately ‘Düreresque’ workshop production into an autograph work by the German master.