In 1874 the Gallery acquired two works by Botticelli showing Venus, but only one is now thought to be his work. This case study focuses on the history of taste, connoisseurship, and the ongoing search for an attribution

In the 19th century the painting of Venus with three putti was thought to be by Sandro Botticelli. It was acquired by the Gallery with Botticelli’s famous Venus and Mars, although more was paid for the former work despite the fact that it is today the less well-known of the two pictures. The attribution of the painting now laconically entitled An Allegory has been downgraded, but this does not call into question its authenticity, however awkward and eccentric its design. 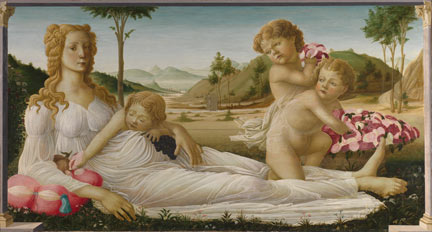 Italian, Florentine, An Allegory, about 1500

Sandro Botticelli, Venus and Mars, about 1485

In 1874 the sale of the collection of Alexander Barker, the son of a fashionable bootmaker, was eagerly watched in London. Even the Prime Minister, Benjamin Disraeli, wrote to Lady Bradford that he meant "to rise early tomorrow and go to Christie’s. If the Barker pictures are as rare and wondrous as I hear, it shall be hard if the nation does not possess them."

Shortly after the auction, writing in the ‘Art Journal’, the art critic J.W. Comyns Carr eulogised over the "important specimens of Art of the early Italian schools" which had just been acquired from the collection. "Two designs by Botticelli complete the list of the works purchased", he wrote, noting that "these represent the classical side of Botticelli’s genius, of which side the National Gallery had previously no example".

One of the two ‘Botticellis’ that were acquired by the Gallery – his justly famous ‘Venus and Mars’– still hangs on the main floor; it is his most celebrated mythological painting outside of the Uffizi Gallery, Florence. The other, ‘An Allegory’, has long been relegated to the lower floor and, until very recently, catalogued as ‘Follower of Sandro Botticelli'.

If price can be used as an indicator of aesthetic value, ’An Allegory’ was the more highly regarded painting when it was sold – it cost £600 more than ‘Venus and Mars’ (£1,627 10s as opposed to £1,050). Not everyone was enthralled by the painting, however. Shortly after the sale, Lady Eastlake wrote to the former Director, William Boxall, lamenting her fears: "[Burton, the new Director] has bought much that is second rate and much that is irreparably injured, and for enormous prices. That Venus and Amorini by S. Botticelli seems to me to be monstrous in price."

Despite her disapproval, Lady Eastlake still believed that the painting was a work by Botticelli. Since 1899, however, its attribution has quite rightly been queried, and by 1951 the curator Martin Davies observed that "it is by some feeble imitator of Botticelli, and seems to be partly derived from Botticelli’s 'Venus and Mars'".

Investigation of the pigments

The ‘feebleness’ that so worried Davies might give rise to suspicions that the painting is a fake. There is, however, no evidence to suggest that it is not a 15th-century picture. The binding medium has been confirmed as egg tempera, typical of the period. The blue pigment of the sky is composed of azurite mixed with lead white, while the dark green grass of the background contains spherulitic malachite.

SEM-EDX analysis of these green particles identified mostly malachite with a small impurity of chlorine. Copper chloride and potassium aluminium silicate are also present. Such results are consistent with the analyses of spherical malachite from other (15th-century) Italian paintings in the Gallery, where in all instances the pigment was found to be associated with silica and potassium aluminium silicate.

The painting is underdrawn in a liquid medium, from a design which might have been transferred from a cartoon – or indeed from several. 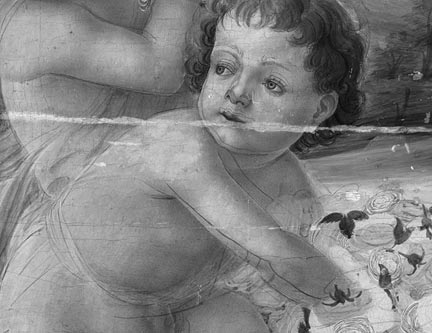 Infrared reflectogram, showing alterations to the position of the putto on the right hand side, 'An Allegory'

The figures and main aspects of the composition are outlined, but there is no hatching. The infrared reflectogram reveals that elements of the composition were repositioned, suggesting that although it might derive its inspiration from works such as the National Gallery ‘Venus and Mars’, the painting is not an exact copy of an earlier work. These repositioned elements are most evident in the face and arms of the putto furthest on the right.

A painting of closely related design, ‘Venus and Three Putti’, is preserved in the Louvre, Paris, prompting curators to ask if they might be by the same hand.

The Louvre painting also shows a reclining Venus with three putti before a landscape, and seems to have been as celebrated in the 19th century as the Barker ‘Botticellis’. One critic, Zacharie Astruc, singled the picture out for special attention when it went on display in the Musée Napoléon III in 1862. "The chief work is 'Venus [and Three Putti]'", he wrote, describing it as an "admirable masterpiece conceived in a disposition of almost disquieting bizarreness". The Louvre painting might even have been the source for the detached gaze in Manet's revolutionary ‘Olympia’.

The Louvre panel is painted on three wide poplar boards and, like the National Gallery work, the sky includes azurite. The painting is also extensively underdrawn with a brush. Although in ruinous condition, the Louvre painting can be related stylistically to work produced in the workshop of Botticelli. This is particularly evident in the painting of the head and some elements of the landscape, where they survive.

The National Gallery ‘Allegory’, however, shows neither stylistic nor technical affinity with the work of Botticelli, and it should perhaps be removed from his ambit completely. But this is not to suggest that it is not a genuine work of the late 15th century or very early 16th century.