A Dominican, with the Attributes of Saint Peter Martyr

Although altered about a century after it was completed, Bellini’s original painting can still be appreciated under the later paint

For most of the 19th century, A Dominican, with the Attributes of Saint Peter Martyr was considered an important work by Giovanni Bellini. Yet despite bearing the artist’s signature, it has often since been attributed to his workshop, or even to his brother Gentile. The main reason for this diminished status was probably the painting’s relatively poor condition and the fact that it was altered at a later date from a portrait into an image of Saint Peter Martyr by the addition of the saint's attributes. 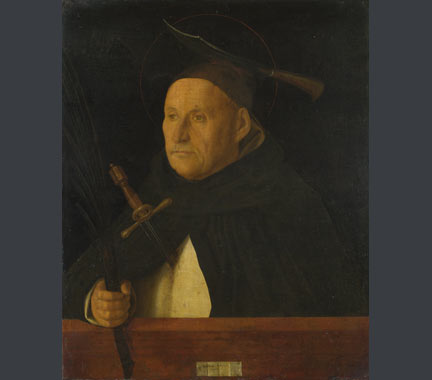 Giovanni Bellini, A Dominican, with the Attributes of Saint Peter Martyr, about 1490–1500 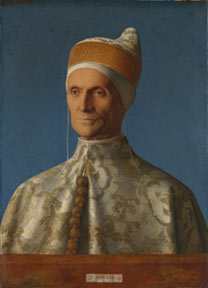 In the first half of the 19th century, this painting was one of the most prestigious works in the Sommi Picenardi collection in Cremona, Italy. It was purchased by the National Gallery in September 1869 as a work by Giovanni Bellini, and for a while was displayed in the same room as Bellini’s celebrated Doge Leonardo Loredan.

By about 1880, however, the Italian art historians Giovanni Morelli and Gustavo Frizzoni had begun to doubt Bellini’s authorship, arguing that the signature on the scrap of paper illusionistically attached to the parapet was fake. They attributed the work instead to Bellini’s brother, Gentile. From this point onwards the picture has never been considered an autograph work by Giovanni.

The making of a saint

Early in the 20th century, the art historian Detlev von Hadeln was the first to argue that the attributes of Saint Peter Martyr – the dagger, the cleaver embedded in his skull, the palm of martyrdom and the halo – were later additions to the work. 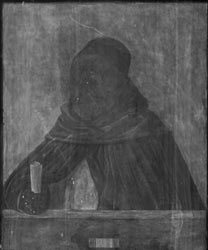 X-radiograph of 'A Dominican, with the Attributes of Saint Peter Martyr', showing the friar holding a scroll, rather than the palm of martyrdom, in his right hand

In 1950, Gallery curator Martin Davies published an X-radiograph of the picture. It confirmed that these elements had been added at a later stage, and that the friar had originally held a scroll with his right hand. The painting’s original green background had also been overpainted in a dark colour, perhaps at the same time as the additions.

In order to establish the date of these alterations, pigment samples were taken from the saint’s attributes, particularly the peculiar dagger protruding from his breast. The dagger was painted over an old discoloured varnish. It also contains lead-tin yellow pigment, which was not in use in Italy after the 17th century. The alterations must therefore precede this date.

Additional research into the dagger itself has narrowed the dating further. Tobias Capwell, Curator of Arms and Armour at the Wallace Collection, has pointed out that the specific type of parrying dagger depicted in the painting, with its swelling guard terminals and faceted pommel, seems to have been in use about 1580–1620, and the alterations may date to that period or a little later. 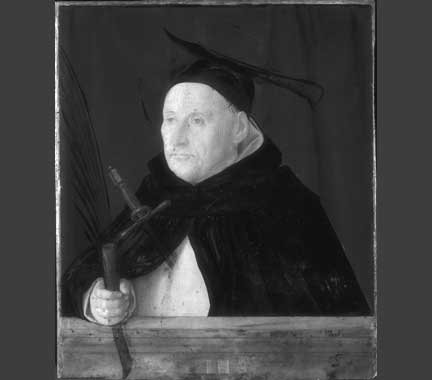 Infrared reflectogram of 'A Dominican, with the Attributes of Saint Peter Martyr'. A curtain is visible in the background and the face of the friar shows a detailed underdrawing

An infrared reflectogram has revealed further elements that might support an attribution to Giovanni Bellini himself. The face of the friar shows an extremely detailed and refined underdrawing. The signature – in italics, and not the capitals that were often used by Bellini’s workshop – is a little retouched, but basically original. Moreover, a curtain is visible underneath the dark background, which was originally green, giving the portrait a level of sophistication that is lost in its overpainted state. 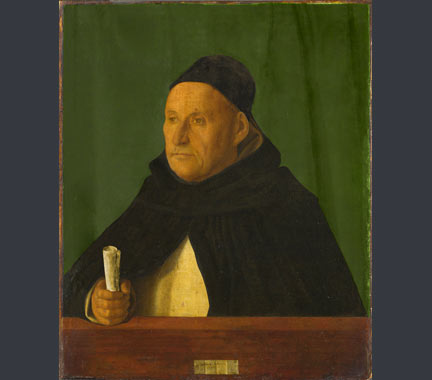 Digitally processed image (incorporating X-radiograph, infrared reflectogram and green background) showing how 'A Dominican, with the Attributes of Saint Peter Martyr' may have looked originally

Recent technical examination has demonstrated that the National Gallery’s painting has lost many of its original qualities. Yet despite its worn and restored surface, the friar’s face shows something of the painter’s skilful control of both volume and light. It is particularly striking to compare it with ‘Portrait of a Young Man’ in the National Gallery of Art, Washington, D.C. Also bearing a signature in italics, it is considered by most art historians to be an autograph work by Giovanni Bellini. Giovanni Bellini, 'Portrait of a Young Man', about 1490–5
Image courtesy of the Board of Trustees, National Gallery of Art, Washington, D.C.

The picture has always been considered to be a late work, and perhaps also for this reason often attributed to Bellini’s workshop, which was extremely productive in his late career. It seems to be a little earlier than ‘Doge Leonardo Loredan’, which from historical and circumstantial evidence can be dated to 1501–2. Taking into account the stylistic affinities with the Washington portrait, 'A Dominican’ may therefore be a work of the mid-1490s. At this time we know that Giovanni Bellini was particularly interested in Flemish portraiture, such as that of Hans Memling, which is clearly shown in the setting and style of these two portraits.

Painting
A Dominican, with the Attributes of Saint Peter Martyr
Giovanni Bellini