This long rectangular panel was made as a predella, the lowest tier of an altarpiece, and was commissioned by the Company of Saint Jerome for their church in Arezzo. The main panel, now in the Museo Civico, Arezzo, shows the Virgin Mary with symbols that refer to the doctrine of the Immaculate Conception, which states that she was conceived without sin.

The central scene shows Esther appealing to her husband, the Persian king Ahasuerus, to put a stop to his advisor Haman’s plans to massacre the Jews, an intervention which made her a hero (Esther 8: 3–6). Esther is here singled out by Ahasuerus, a gesture that is seen as a forerunner to the Virgin Mary being chosen by God to be born free from sin. The surrounding scenes show Saint Jerome, who appeared in the visions of various clerics after his death.

This long rectangular panel is painted with scenes from the life of Saint Jerome, surrounding a central image from the story of the Old Testament hero Esther. It was made as a predella, the lowest tier of an altarpiece which runs along the bottom of the main panel.

The altarpiece was commissioned jointly in 1519 by Niccolò Gamurrini, a papal officer in Rome, and the Company of Saint Jerome for their church in Arezzo. The contract stated that Signorelli ought to include painted pilasters and a predella, decorated with scenes ‘pleasing to the confraternity’. The main panel, which is now in the Museo Civico, Arezzo, shows the Virgin Mary surrounded by saints and prophets, including Saint Jerome, who stands in the foreground in the position of honour to her right. The Virgin is shown with symbols that refer to the doctrine of the Immaculate Conception, which stated that she was conceived without sin.

Esther was sometimes seen as an Old Testament forerunner of the Virgin; like Mary, she was a humble Jewish woman who was elevated to a position of high rank. Esther was married to Ahasuerus, King of Persia; through her bravery in appealing to him to spare the Jews from a massacre planned by his chief advisor, she became a hero of her people. This scene shows her pleading to the King to put a stop to the murderous decree (Esther 8: 3–6).

Here she is attended by two maids, who support her body; Esther was so fearful of Ahasuerus that she fainted in his presence. Horrified at her state, he promised to protect the Jews. These details come from apocryphal Greek additions to the biblical text, which describe how, ‘raising his golden sceptre he laid it on Esther’s neck, embraced her and said, "Speak to me."’ This singling out of Esther by the King was often associated with the Virgin’s special status as born free from sin.

The three surrounding scenes show episodes that, according to the legend of Saint Jerome, occurred after his death when he appeared to various clerics as a vision. In the first scene to the far left, Saint Jerome and Saint John the Baptist appear to Saint Augustine; in the next, he appears with Christ to Sulpicius Severus. Finally, to the right of the scene with Esther, he appears to Saint Cyril, again with Christ. These episodes were recorded in a fourteenth-century Latin text by Giovanni da Bologna, translated into Italian and published frequently in the fifteenth century as Il Divoto Transito del Glorioso Sancto Hieronymo.

(Showing 6 of 8 works)
Coriolanus persuaded by his Family to spare Rome
Luca Signorelli
This picture, painted in fresco (directly onto wet plaster), was part of a series of eight which decorated the walls of the palace belonging to Pandolfo Petrucci, the ruler of Siena. He commissioned the frescoes to celebrate the marriage of his son to Pope Pius III’s niece. Two others survive in...
Not on display
Man on a Ladder
Luca Signorelli
This fragment of a larger painting shows an elderly man on a precarious descent down a ladder. His grip is obstructed by a pair of pincers, which he has used to extract the nails which secured Christ to the Cross. Signorelli was noted in his time for his skill at depicting the human body in a var...
Room 61
The Adoration of the Shepherds
Luca Signorelli
The focus of this large altarpiece is the tiny infant Christ – he lies on the ground, his head supported by a small cushion. His mother, the Virgin Mary, kneels behind him, surrounded by angels. Also gathered in worship are Mary’s husband Joseph and, to the left, four shepherds.The shepherds appe...
Room 61
The Adoration of the Shepherds
Luca Signorelli
The Virgin Mary kneels and bows her head before the newborn Christ, while her husband Joseph sits behind her on a low rock. Three shepherds bow in worship to the left. Despite its small scale, the painting demonstrates Signorelli’s immense skill at drawing the human body in complex poses, coverin...
Not on display
The Circumcision
Luca Signorelli
Following Jewish tradition, Christ was circumcised when he was eight days old (Luke 2: 21). Seated on his mother’s lap, Christ reaches out to the mohel, the man who will perform the surgery, who holds a fine blade. The vibrantly coloured marble floor tiles are designed to attract the viewer’s att...
Room 61 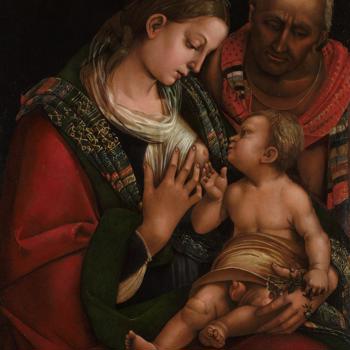 The Holy Family
Luca Signorelli
The Virgin Mary holds her clothing out the way as Christ leans towards her to breastfeed, and Saint Joseph dotes upon him. By using a plain dark background and a tightly cropped close-up view, Signorelli invites us to share in this intimate moment.Signorelli was well known for his ability to pain...
Room 61
The Triumph of Chastity: Love Disarmed and Bound
Luca Signorelli
This picture, painted in fresco (directly onto wet plaster) was part of the decoration of a room in the palace of the ruling Petrucci family of Siena. Two others survive in the National Gallery’s collection.Love – the naked youth with multi-coloured wings – is chased, captured and finally bound b...
Not on display
The Virgin and Child with Saints
Luca Signorelli
This large painting of the Virgin Mary surrounded by saints was part of an altarpiece. It was made for a chapel dedicated to Saint Christina of Bolsena in the church of San Francesco in Montone, in the Italian region of Umbria.A large stone hangs from a rope looped round Christina’s neck, as a r...
Not on display
You've viewed 6 of 8 paintings