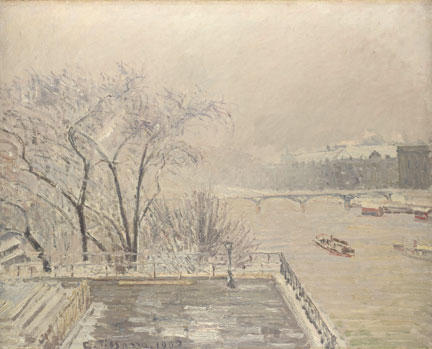 Clive Head: Looking at [Camille] Pissarro, ‘The Louvre under Snow’, we see an artist that is very aware of the use of perspective to construct space. And yet, if we look a bit more closely, we see that these – the orthogonal construction in the foreground, this platform with these very strong lines – do not actually converge to a horizon line. They converge to a point somewhere well above the horizon line in the sky.

Now that might suggest a fairly simple, modernist idea of flattening the picture plane, tipping up the foreground and emphasising the surface of the painting. I think, actually, that’s probably somewhat of a fallacy. I think what Pissarro is doing is... is creating a vanishing zone in the centre of the painting rather than working with a single point. And that zone becomes almost like an infinite zone... a fog if you like. A cloud of space: vast, deep space, which is being asserted by the position of these orthogonals.

I think with Impressionist paintings there is an assumption that the Impressionists were very aware of photography and had begun to use some of the photographic devices... of which obviously perspective is the... is the underlying principle of... of photographic space. Pissarro, in this rather peculiar painting, is being quite subversive. Because he’s actually unpicking that. Instead of talking about photographic space, we have not only this foreground structure but also the... the angle at which the bridge is constructed, which seems to go against any kind of... photographic kind of space. It’s sort of rather a peculiar angle as it dips into the centre of the painting.

The whole point of Pissarro’s painting, I think, is to try and create a substantial field of space and to find some fixing out of the flux of nature. It doesn’t really deal with the fleeting moment. If we look at the way the water is painted, it has a tremendous solidity, with the emphasis on those horizontal brush marks. Probably the buildings themselves become the most sort of... vapoured passages in the painting.

Clive Head considers Pissarro's subversion of the rules of photographic perspective. How did he manage to create paintings which appear to capture more than a fleeting moment?